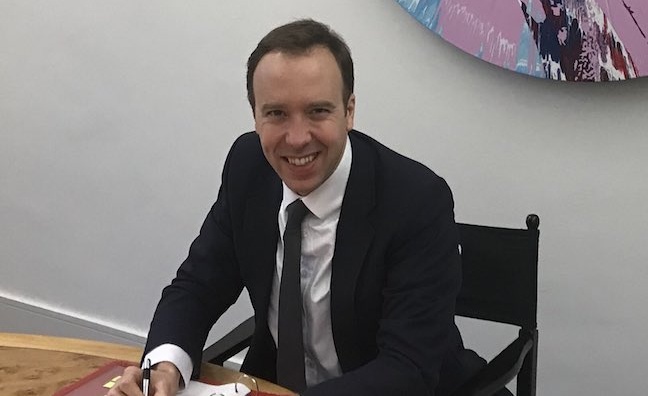 There are two obvious pluses for the Hancock appointment: he was already in the department, as Minister Of State For Digital & Culture, and he actually appears to like music and take an interest in the industry.

Geoff Taylor, chief executive BPI & BRIT Awards, said: “We welcome the appointment of Matt Hancock as Secretary for State at DCMS and extend our sincere congratulations on this deserved promotion.

“Matt Hancock has shown himself to be a passionate champion of the creative industries and an ardent supporter of British music and a Minister that gets things done. He has set forward a clear vision for the creative and digital industries through the Digital Charter, pioneering a new UK approach in which online intermediaries work more closely with Government to deliver enhanced protection for consumers and promote business growth.

“We look forward to continuing our productive relationship with the Secretary for State and his team at DCMS and we wish him well in this important role for our sector.”

UK Music CEO Michael Dugher said: “Matt Hancock's appointment will be widely welcomed throughout the music industry. As the Minister for his Digital, Matt showed that he is always willing to engage with the industry, to listen to our concerns and importantly to get things done.

"He has a thorough grasp of the issues facing our industry and has already worked very closely with UK Music on the importance of protecting IP, dealing with the impact of Brexit, scrapping Form 696 and combating rip-off secondary ticketing. It's a great appointment and we look forward to working with him on the future challenges and opportunities for the music industry.”

As well as pinning Tweets about the campaign against secondary ticketing, Hancock’s feed is full of announcements from the BPI, PPL and other industry organisations. Last week he even did an interview with NME, and is on record as being a grime fan, though he also appreciates the biggest-selling artist of 2017.

“Ed Sheeran has been amazing for the music industry this and the whole album is fantastic, but Galway Girl is probably my favourite song from it,” he said last year.

The live sector in particular has been cheered by Hancock’s stand against secondary ticketing, including last week’s announcement on banning touts from using bots to bulk buy tickets. He also managed to appear a step ahead of the Mayor Of London in bringing about the demise of the controversial Form 696.

The new Culture Secretary has previously made clear that the Government does not back any proposals for a copyright exception for user-generated content online.

After 18 underwhelming months of Karen Bradley, there are signs that Hancock will be a more energetic champion for the music industry. He also looks like he might be comfortable on a night out at the BRIT Awards, which hasn’t always been the case for the incumbents of that job.

Hancock will also have to live up to his pledge to Music Week last year during the election: “For supporting creators of content, for supporting creativity there is no better party than Conservatives. For making sure you can not only learn music but also make a living out of it. “

The Agent Of Change principle and possible legislation may well end up in his governmental red box.

There are ongoing issues that may distract the new Culture Secretary, such as the rollout of high-speed broadband, as homes and businesses will have a legal right to access such services by 2020.

Then there’s the impact and uncertainty for the music industry surrounding Brexit.

John Whittingdale, who was Culture Secretary up to summer 2016, also showed an interest in the music industry but didn’t do himself any favours with his pro-Brexit stance. Hancock (a Remain supporter) will want to avoid a situation where he’s being insulted by indie musicians on Twitter (Mogwai’s Stuart Braithwaite famously branded Whittingdale a “fucking moron”).

As the biz confronts the consequences of the Leave vote, Hancock will likely be a key politician to have on side – assuming he stays in the post beyond March 2019.