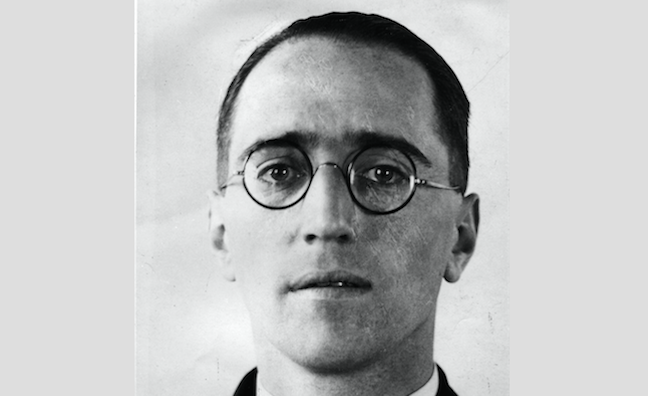 British engineer Alan Dower Blumlein is to be posthumously honoured by The Recording Academy.

Blumlein is the inventor of stereo sound recording, and will be recognised by the Technical Grammy award at a special ceremony to be held later this year.

Born in London in 1903, Blumlein was one of the most prolific inventors of the 20th century, and transformed the worlds of audio and recording technology, television and airborne radar. In March 1929 he joined Columbia Graphophone, one of the forerunners of EMI. During his time at Columbia and EMI he filed 128 patents in 13 years.

On 14 December 1931, Blumlein filed a patent for a two-channel audio system, now known as stereo. He brought his equipment to Abbey Road Studios in 1934 and recorded the London Philharmonic Orchestra. In 2015, he was honoured by the IEEE at Abbey Road by a commemorative plaque.

Blumlein died during The Second World War in 1942, aged 38. He dies while testing the H2S airborne radar system. Given the secret nature of H2S, his death was never officially acknowledged and so despite this major contribution to the Allied war effort, as well as his groundbreaking work in sound recording and television, his accomplishments are not widely known.

His son, Simon Blumlein, commented: “It is a great honour for my father and the Blumlein family to be recognised with such a prestigious award. We’re so immensely proud of him and how his work transformed sound recording. He’s always been held in the highest esteem by recording engineers and so to now receive this acknowledgement from the wider music industry is simply wonderful.”

Universal Music Group are currently developing a film about Blumlein’s life and work. Sir Lucian Grainge, chairman and CEO of Universal Music Group, said: “Alan Dower Blumlein and his prolific period of invention whilst at EMI, not only transformed audio and music recording technology, but also helped shape modern media communications for generations to come through his pioneering work in television. We are delighted that the Recording Academy has chosen to honour his legacy with this posthumous Grammy award. His work, productivity and lasting scientific impact continue to entertain, educate and inspire millions today.”