Can the dance music boom continue? 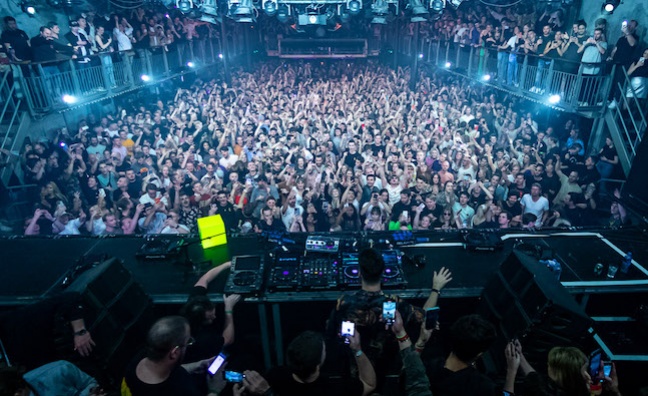 Dance music is on a roll right now.

Singles classified as dance by the Official Charts Company have been at No.1 for 11 out of the last 16 weeks. Top 40 followers will know that included eight weeks for LF System’s smash Afraid To Feel - the biggest single of Q3 and with sales to date of 826,614 (Official Charts Company), as well as two weeks for B.O.T.A. (Baddest Of Them All) by Eliza Rose and Interplanetary System.

Having spent a week at the summit, I’m Good (Blue) by David Guetta & Bebe Rexha is still riding high at No.2 in the latest Top 10. It’s joined by dance track Miss You by Oliver Tree & Robin Schulz, which moved 28-9.

The electronic music sector has just gathered for the Amsterdam Dance Event, which was a chance for DJs and executives to reflect on the genre’s success. Alongside performances by stars such as Oliver Heldens at the Melkweg venue (pictured), the packed conference programme covered issues such as female entrepreneurship, the metaverse, gaming, Web3, YouTube, TikTok and how to crack America.

In the latest issue of Music Week, we reveal the data behind the dance music streaming boom, along with insights from execs including Warner Records’ A&R manager Anton Powers (who signed LF System and co-signed Eliza Rose). We also hear from Atlantic promotions supremo Damian Christian on Fred Again.., who releases a new album on Friday (October 28).

Based on Music Week analysis, we can confirm that the streaming surge kicked in during the pandemic with dance music consumption up 14.8% year-on-year in 2021.

Crucially, that consumption growth has continued to power ahead in 2022, following the end of Covid restrictions last year. Music Week can reveal that up to the end of Q3, streaming for dance music has increased by 7.4% year-on-year so far in 2022 – ahead of the overall streaming market growth rate of 6.4%.

The genre was further boosted by big names such as Drake and Beyonce embracing dance music. In sales terms, Beyonce’s Renaissance was the biggest album released in Q3 (90,029 sales to date), and included lead single Break My Soul, which is classified as dance by the OCC.

Of course, dance hits find a receptive audience in the summer. With the live business in particular hit by inflation, electronic music is now braced for the effects of the cost of living crisis.

Defected CEO Wez Saunders is clearly confident about the prospects for the genre, having just acquired the company. Here, Music Week quizzes Saunders about the outlook for dance music…

Dance music is streaming strongly in 2022 and the genre has produced singles chart No.1s alongside club hits. What do you think is behind the genre's success this year?

“Dance music – particularly house and disco - has been a cultural movement since inception. Emerging from the underground with a core community of predominantly LGBTQ+, African American and Latino communities, house music at its very core has always brought people together on the dancefloor through happy, energetic, positive beats. It’s not surprising that, during a time where the world needs hope, dance music is shining through.”

It’s not surprising that, during a time where the world needs hope, dance music is shining through

Now we're out of summer and festivals/events, what's the outlook for dance music in 2022/23 - how can it build on success without the seasonal boost?

“2022 has been a challenge for many. We have welcomed three years of newly-turned 18-year-olds, who have entered a world of increasing prices, infinite opportunities and limited income. I think that the post-pandemic boom during the summer of 2021 saw an increase in events, which unfortunately came just before a time of rising prices and as such many events brands struggled. We have seen ticketing companies go out of business, and the knock-on effect of that has been damaging for many.

“Brexit has meant that British workers were at a 30-year low in Ibiza, and the world is generally finding its feet again. I like to believe we have all learned valuable lessons in 2022, and as such will no doubt build on those learnings. I expect prices to begin levelling out somewhat and I hope that the UK and the EU step closer to an agreement which will help young people work abroad next summer.”

How will Defected further tap into this growing dance market?

“Our fans and our artists are at the centre of everything we do. Defected’s mission is to service our community whilst helping artists build longer lasting, more impactful, and more profitable careers. Our virtual festivals during 2020 enabled us to further identify the width of our fan base. As such, it is imperative that we continue to serve those physically through events and physical products, digitally through streaming, through our new app, and through online activity such as Defected Broadcasting House - and eventually within Web3. We will look at providing new opportunities and experiences in the USA, South America and Australia, whilst remaining consistent with our UK and European offerings.”

How much is the growing popularity of dance music driving demand for remixes. Have you noticed a trend for increasing numbers of remixes of a hot track?

“Remixes of hot tracks have always been designed to keep the momentum, or introduce the record to new audiences. Once a track achieves that commercial appeal, there will be a desire to keep it in the record boxes of the underground club DJs. Perhaps it’s getting heat in the house lane, but you want to introduce it to the disco, or techno, or drum & bass fans. Perhaps the record is huge in Western Europe but you’re looking for that North American appeal. We now have so much access to data, that I think as the plots on priority records grow, there’s a desire to help reach new audiences – and with that, an increase in remixes. It’s been very interesting to see ‘the remix’ extend beyond house music in recent times.”

Subscribers can read the Big Story on dance music from our latest issue here.