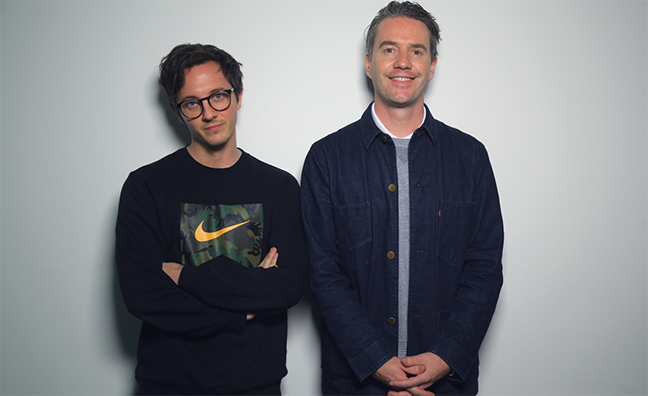 This week, one of the UK's favourite modern indie labels, Chess Club, celebrates its 10th birthday.

To mark the occasion, the label is hosting a pop-up shop at The Old Shoreditch Station Café in London, with special merchandise, drinks and performances and DJs sets from folk singer Billie Marten and Sundara Karma. This will be followed by a party at London’s The Curtain on November 2.

Founded initially as a club night by Street, A&R manager at RCA, and Red Light Management’s Peter McGaughrin, Chess Club has released records by artists such as Mumford & Sons, MØ and Wolf Alice. Alongside its singles operation, the label also signs acts to release albums in partnership with RCA, and runs a publishing arm in tandem with Downtown Music Publishing.

Plenty to celebrate, then. To that end, Music Week sat down with Street to hear about 10 of his favourite memories from Chess Club's story so far...

Sometimes you just get the feeling you’ve just witnessed something exceptional. It doesn’t happen often but when it does you have to make sure you act. When I first heard Billie Marten sing in 2014, I knew that I was listening to a very special talent but when I then learnt that she was only 14 years old it blew my mind. After a couple tips up to Yorkshire to meet with Billie we decided to start working together. Last year, when she was 17, we released her debut album. The record received glowing reviews across the board from media including this quote from the Sunday Times: ‘Marten places herself in the company of Nick Drake, John Martyn, Kate Bush and Joni Mitchell’. It’s one of the records we’ve been most proud of. Excitingly, we’ve just started writing towards Billie’s second record so watch this space!

When Jungle’s manager came in to see us and played us Platoon for the first time we were floored. It was such a cool-sounding record. We were super-keen to work with them in releasing it. We very rarely agree to work with an artist before meeting them first, so asked management if we could meet them. To our surprise, the manager told us that he actually had never met them as the band wanted to remain anonymous, but was due to see them that evening and would tell them we were keen to meet.

The next day we got a message saying we could meet them in Soho. We were sat there waiting for the band to arrive and, eventually, along the frosted glass wall off the office we see two figures approaching. When it opened I was shocked to see it was too of my old schoolmates, one of whom I sat next to every week at QPR!

It turns out they had asked management not to tell us their identity as they wanted us to judge the music without any preconceptions. That same approach was used when we released their first tracks, Platoon and The Heat. For ages, there was speculation raging about who Jungle were. Were they a duo? A band? A solo artist? Black or white? Everybody was left to judge the music on it’s own merit and all agreed it was brilliant!

Back in 2009, we were asked by Green Peace to curate and host an acoustic stage in the Green Fields. The stage was tiny, essentially just a glorified soapbox attached to the side of a soup kitchen. We brought a bunch of mates from London to come and play including Mumford & Sons and Laura Marling. At lunchtime I wrote the line-up on a small chalkboard out the front of the tent. A couple of hours later I noticed the field was getting busier and people were starting to turn up at the tent.

Not long after they had to shut the entrance to the whole field because there were too many people trying to get in. By the time the bands went on, there was a crowd about 40-deep outside the tent. People were slashing the sides and climbing the rigging to get a view of the bands, it was absolute chaos. The next year Mumfords and Laura both made their official Glastonbury debuts to huge crowds on the John Peel and Park Stage respectively. It’s nice to say that their ‘real’ Glasto debut was on actually on the Chess Club stage…

MØ, the Lean On phenomenon:

It isn’t every day that you have an artist who’s the voice of the biggest song in the world. When we first heard the collaboration between Major Lazer and our very own MØ we couldn’t have imagined just how massive it was going to be. We were all in agreement that the song was cool as hell, but if you had told us that it would go on to become the most streamed song of all time we would have been skeptical to say the least.

However, that’s exactly what happened - the song just blew up! It was unstoppable and changed the course of MØ’s career forever. Songs like these are real phenomena, and to work with an artist who is so closely involved in one was one of the most exciting moments in our label’s history.

Before Chess Club existed as a label it was a monthly club night. We prided ourselves on booking artists before they had become household names and showcasing them in small and intimate venues. Over the years we had some incredible artists play our nights, including unsigned performances from Florence + The Machine, The xx and Mumford & Sons, and debut UK shows from Lykke Li, MGMT, Yeasayer and Bon Iver.

One memory that will stick with me forever was during the Bon Iver show we put on at The Social in May 2008. For the last song, Justin Vernon unplugged his guitar, walked into the middle of the crowd and played Skinny Love. Everyone left that show knowing something very special had just happened. Needless to say that song went on to change many lives.

Zane Lowe signing off with Blood:

Back in 2009, we released an EP from an Australian group called The Middle East. At the time the release picked up strong critical acclaim and specialist support but never broke into mainstream consciousness. Shortly afterwards, the band sadly split up due to artistic differences.

Fast forward to 2015, and British music radio was sadly saying its goodbye to Zane Lowe. It was going to be a real honour for every band that Zane chose to include in his sign off show. Naturally, I was listening and was taken back when after about four songs in, he started to introduce the next track and it’s Blood. I literally hadn’t heard it for close to five years.

Zane spoke about how some pieces of music just resonate and stay with you forever, and this was one of those tracks for him. I felt very proud that someone as influential as Zane chose to include a track from our catalogue to soundtrack such a historic moment in his career.

In July 2016, we flew out to Denmark to watch our leading lady MØ headline Roskilde Festival in front of 80,000 screaming fans. Nowadays, MØ is a pretty big deal wherever she goes, but back home in Denmark she is enormous. It was such a huge moment for her and we couldn’t have been prouder. We’re sure that she’ll be playing in front of 80,000 people all over the planet before too long.

Six years ago, I decided to make some label merch for the first time. At the time there was a trend of taking famous fashion brand logos and putting a tongue in cheek twist on them. Everyone remembers the Chanel / Chicken Cottage Ts right!? Well, I decided to do the same by taking the Chanel logo and replacing the ‘Chanel’ with ‘Chess Club’. Genius!

I made small run of 100 and gifted them to our bands and friends. They proved to be very popular to the point where some of our acts even did photo shoots in them. Somehow, Chanel caught on and issued me with a very angry letter from their lawyers. Be warned, the fashion police are real! To this day I still get people asking me for one of our infamous Chanel/CC Ts.?

There are so many people behind the scenes who are vital to the smooth running of the label. Without them we just wouldn’t be able to function. Special shout out to our distributor Pete from Genepool who has been with us since our first ever release back in 2007.

When we first started, we had no idea how you made vinyl or got it in record shops and on iTunes. In those early days Pete had the patience of a saint and showed us the ropes. To this day he still makes sure our records come out when they’re supposed to. Across so many of our releases we’ve had the opportunity to work with some incredibly talented and passionate PRs. One of the best things about running a label is you get to meet so many people who love music as much as you do. Over the 10 years of working with so many different companies we’ve met some inspiring people and made some special friendships.

As part of our 10-year anniversary celebrations we’re opening up our first ever pop-up shop! The shop will be open October 31-November 1 at The Old Shoreditch Station. We’ll be selling commemorative merch, vinyl and will have a couple of special in-store performances. Most importantly there is also a fully stocked bar so come and hang out!