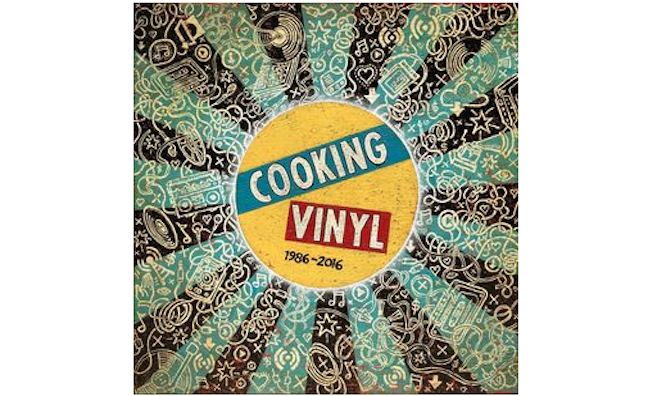 Cooking Vinyl has revealed details of its 30th anniversary celebrations, which include a £30,000 funding initiative, a collaboration with PledgeMusic, a series of live events and a new book chronicling its history.

Founded in 1986 by Martin Goldschmidt and his original business partner Pete Lawrence, Cooking Vinyl has been home to an eclectic and diverse range of artists. Its recent roster has included Billy Bragg, Marilyn Manson, Richard Ashcroft, Madness, James, Frank Black, Gary Numan, Amanda Palmer, The Pretty Reckless, Suzanne Vega, Alison Moyet, The Cult, Lissie, Royksopp and The Prodigy, among others.

To mark its 30th anniversary, the company has teamed up with PledgeMusic to launch a special campaign, offering music fans the chance to buy a range of exclusive items, including a limited edition box set, which will be available on CD and vinyl with 70 tracks on each format and 32-page booklet. This will be released on November 25. Other merchandise will also be available.

As part of the PledgeMusic campaign, Cooking Vinyl is also launching a £30k industry fund – a global, bi-annual initiative whereby Cooking Vinyl will invest an initial £30,000 to help artists needing assistance with various aspects of their development, entrepreneurs seeking seed capital for new ideas and those who want to utilie music for charitable causes.

The fund is a loan-based initiative designed to encourage the recipients to pay back into the scheme when they are able to do so with the aim of creating something that can be made available to new generations of artists and entrepreneurs.

Interested parties will submit an application for funding via PledgeMusic, which will oversee the process. Successful finalists will be invited to make a final pitch at Cooking Vinyl’s London HQ or via Skype if overseas.

The company is also releasing a new book on the history of Cooking Vinyl scheduled for release at the end of the year. Written by music journalist and author Hanspeter Kuensler it will be available via PledgeMusic and Unbound, a specialist crowdfunding platform for new literary projects.

Furthermore, a series of live shows in London will be held during December. Taking place at The Lexington in London on December 5, 6 and 7 the shows will feature past and present Cooking Vinyl artists.

All profits from the commercial activities surrounding Cooking Vinyl’s 30th anniversary will be donated equally between the following causes:

Hope Not Hate
The Hope Not Hate campaign was founded in 2004 to provide a positive antidote to the politics of hate. The British National Party (BNP) was winning substantial votes and local councilors in our northern towns and traditional anti-racism and anti-fascism was failing.
www.hopenothate.org.uk

Nordoff Robbins
Nordoff Robbins is the largest independent music therapy charity in the UK, dedicated to changing the lives of vulnerable and isolated people.
www.nordoff-robbins.org.uk

Palestine Music Expo
The Expo will showcase both established and upcoming Palestinian artists to local audiences and key members of the international music industry. The Expo will bring artists and professionals together, in an effort to build mutually beneficial relationships and develop valuable networking opportunities in Palestine.
www.palestinemusicexpo.com