'I have to have a winning franchise': Scott Borchetta talks Pretty Vicious, Big Machine's future and life after Taylor Swift 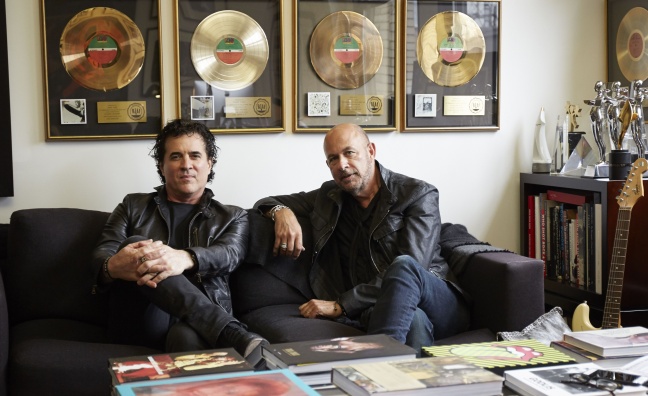 What do you do when your biggest star signs a deal with another label? Well, if you’re Scott Borchetta, Big Machine president and CEO, the answer is: plenty.

His star artist Taylor Swift – who he signed as a teenage country singer-songwriter and helped become the biggest pop star on the planet – may have left for Republic/Universal after six albums on Big Machine, including last year’s record-breaking Reputation.

But Borchetta and Big Machine have no shortage of other projects to keep them occupied. Not least Big Machine/John Varvatos Records, the JV with renowned fashion designer John Varvatos, which will concentrate on rock music rather than Borchetta’s trademark country (Big Machine’s roster also boasts country superstars such as Florida Georgia Line, Lady Antebellum and Sugarland).

Borchetta and Varvatos (pictured) have made Welsh rockers Pretty Vicious – currently causing a stir with new single Are You Entertained and set to release a debut album in early 2019 – their first UK signings to the label.

So to celebrate, Borchetta sat down with Music Week to talk Pretty Vicious, John Varvatos, the Big Machine sale rumours and, yes, life after Taylor Swift…

How did you discover Pretty Vicious?

“Our A&R head Julian Raymond made John Varvatos and I aware of them and, as soon as we heard the music, we were really knocked out. Julian and John flew over to London and went to a showcase at their practice room and they immediately called me and said, ‘This band lives up to their name, they are ferocious’.”

Pretty Vicious have already been through the label system once at Virgin EMI (which will also be their UK home this time around, through Big Machine’s long association with the British label). Did that give you any concerns?

“Speaking with Ted Cockle and David Joseph and catching up to what the problems were, having that experience means we caught them at a really great time, because they were able to work out a lot of their issues. You throw a bunch of young kids into an opportunity like that, they don’t know which way was up, so we really benefitted. The great thing is, even though they’re really young, they all realise that what they have together is really powerful. Ninety nine per cent of bands fall apart after something like that, but to go through all the mess that they had to go through has made the bond within the band even stronger.”

Can they be successful on both sides of the Atlantic?

“I really believe that, that’s why we signed them. We signed this band because when you find a voice like that, you want to help it, protect it, guide it. I don’t see any other bands in that lane right now who have the intensity that they do. They can be huge on both sides and they’re young, so we can send them out on the road non-stop – because that’s still the best way to break a rock band, literally door-to-door.”

The rise of streaming seems to have made it harder for rock bands to break through. How do you get around that?

“I look at it as an opportunity. All of this is cyclical, whether it’s pop or hip-hop or country or rock or whatever sub-genre. To begin with I see a lot of headroom for it to grow. The problem that we have in the States goes back 20 years, when they started slicing the [radio] format up. When it became active rock and alternative and mainstream and this and that. No no no, it’s all rock music and that’s what we’ve been able to maintain in country. When they tried to slice country up, we were powerful enough in Nashville or to say, ‘No, a hit is a hit and we put the music out, you don’t decide’. Unfortunately, nobody was minding the store when they sliced up the pie of rock music so there hasn’t been a connective tissue coast-to-coast for all these young bands to be on the radio.”

How does the JV with John Varvatos fit in with the rest of the Big Machine operation?

“It’s a very natural fit. John and I grew up on the same music, have a lot of the same ideas and we are both entrepreneurial. It’s been so easy. This isn’t a vanity thing for him, he loves this music, he’s out there listening to bands and he’s a great partner.”

With all the changes at Big Machine, will there be more emphasis on rock now?

“We’re going to really go for it but, at the end of the day, the business has to make sense. We’re going to give it every opportunity but I can’t run away from my core business either. We’ve got a very robust country business and I think we can build a rock business. We’re both very pragmatic about it. We love this music but we’ve got to make sure there’s a real audience for it. We have this thing at the label: every artist has an audience, we just don’t know how big.”

Someone with a very big audience has just left Big Machine. Does the departure of Taylor Swift give you more time to do other things?

“Obviously I spent a lot of time on the Taylor piece of our business and it absolutely opens up for more opportunities to continue the build. But even while she was here, which was just a great run and we have a great relationship with her still, we didn’t stop. To growing out to four labels and the things that we do in other places of entertainment… I always planned for these days. We very specifically built a very big business, whether she was going to be part of it or not. I look at us as you would look at [Los Angeles basketball team] the Lakers; Wilt Chamberlain or Magic Johnson or Kobe Bryant or whoever, I have to have a winning franchise, regardless of who my superstars are. And that’s the way I’ve always approached this. We were completely prepared and excited for her and it gives us a lot of time to continue the other things. But you don’t have the kind of results we have without making sure everything’s taken care of.”

“Oh yeah, for sure. We were in contact the whole time. She’s an amazing human being and we had a great run together. All the biggest acts in the world have a moment like this, where they either end up staying at a label like Bruce Springsteen, or you look at The Rolling Stones and how many different deals they’ve had throughout their career. The thing I’m most proud about my work with Taylor is, we created a global movement and that’s in the history books. Nobody takes that away.”

“That rumour has existed since the day we opened. It’s fun to just let people talk about it because we don’t let if affect what we do. We get up and go to work every day and build this label up. We’ve had an amazing run and we’re going to keep going. If anything changes, you’ll know all about it.”

So are you saying the company isn’t for sale?

“Could something crazy happen tomorrow and somebody give me an offer that I couldn’t truly refuse? Maybe it’s a conversation. But what happens, if you look at the history of our label, when we get to the end of our distribution deal, conversations start happening. It’s like, ‘OK, is this the best deal for us? Are there other opportunities?’ More than anything, once lawyers start talking, rumours start spreading, and the reality for right now is our distribution deal with Universal ends at the end of next year, so now is the time for those conversations to get really robust about, ‘OK, here’s where we are now, what do we want to do next? What’s the best thing for my artists and executives?’ That’s how I operate.”

* To read the full story of Pretty Vicious and Big Machine’s future plans, including interviews with Borchetta and John Varvatos, see this week’s print edition of Music Week or click here. To subscribe and never miss a vital music biz story, click here.