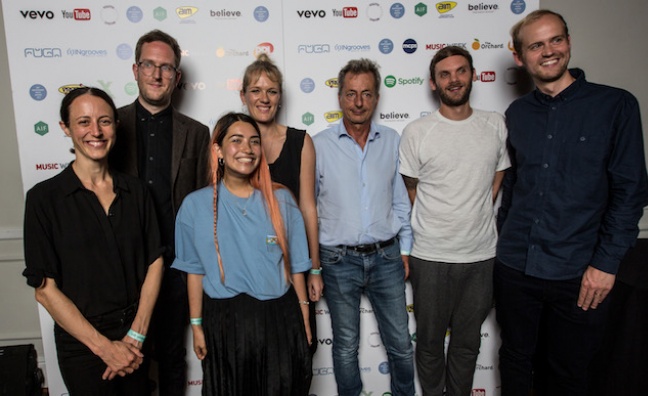 Because Music had a good night at the AIM Awards earlier this week, winning Independent Label Of The Year following success with Metronomy, Django Django, Little Dragon, Christine And The Queens and Major Lazer. As the picture shows, the UK team turned out to celebrate with label founder Emmanuel de Buretel.

But it was also a bittersweet moment as Because Music UK SVP of A&R and marketing is leaving the company after more than a decade to become global chief creative officer at PIAS. To mark her departure in the next couple of weeks – and the AIM Awards victory – Music Week got Third and de Buretel together for a final joint interview…

Is it good to be going out on a high?

Jane Third: Yeah, absolutely. It couldn’t be a better way. We had a lot of commercial success last year. We had the No.1 single and the No.2 album in the charts in the same week – that was Major Lazer and Christine And The Queens. We were just a team of five people working on that project, so I think it goes to show that bigger doesn’t mean better. You don’t have to be on a major to have commercial success. But, on top of that, even though we had a lot of commercial success last year, the thing I’m most proud of from the last 10 years is all of the artists’ careers that we have built up along the way. All the gold records and silver records and Mercury nominations and things that we had in those 10 years.

What are you going to miss about each other, do you think?

You haven’t had any recently, I’m sure?

JT: Probably about half an hour ago.

EDB: No, not because of us. Sometimes the band, the situation is complex, so it’s good to have smart people. These businesses need more and more smart people, and the good thing is Jane is staying in the music business and she will bring a lot to the English music business. She is on the board of AIM and she will stay. The important thing is what she brings to the UK artists.

What’s going on with recruiting a replacement?

JT: There’s a lot of changes happening because of the London back catalogue acquisition, so I think there is going to be a big restructure and lots of new people hired. But whether there is anyone directly replacing me, I don’t think so.

EDB: There are very important people who manage the careers of the artists. We have a lot of work on the table with the London catalogue.

JT: Rhian Emanuel is marketing, Ed Pearson is marketing, and Aaron Larney is the legend that holds everything together and without him we would all be screwed. He’s our production manager and he knows where everything is.

What’s Because up to next?

EDB: We are launching the Charlotte Gainsbourg single on Friday – a little surprise. It’s a scoop for Music Week. It’s called Rest, written by Guy-Manuel from Daft Punk and Charlotte. It’s French language, but the album has a lot of English tracks and is written by Charlotte.

Are you going to be keeping an eye on Because, Jane?

JT: Anything that’s on Because UK, I’ll always be a massive fan of, on the whole label, and I’ll be at every show. Ten years is a big part of my life and it doesn’t change anything that I won’t be working there. It’s going to be another amazing 10 years for the company for sure.

Third joined the Music Week Women In Music Roll Of Honour last year, while Because was shortlisted for Independent label at the 2017 Music Week Awards. You can read her recent Music Week Big Interview here.