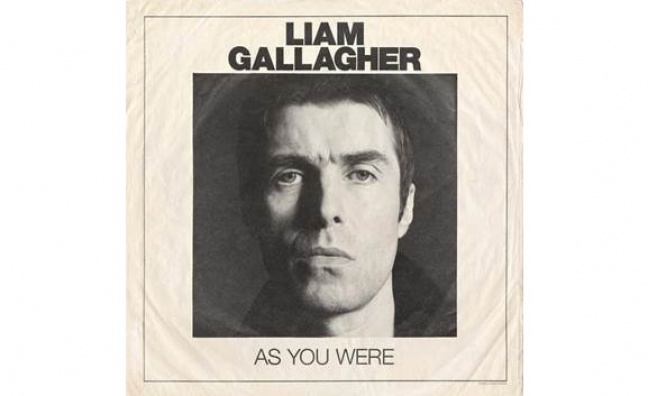 Warner Bros UK president Phil Christie has declared himself “delighted” with the campaign around Liam Gallagher’s long-awaited debut solo album As You Were, which is out today (October 6).

The former Oasis frontman, who signed to the label last summer, returned in June with the No.21 hit Wall Of Glass, the highest-charting rock single of 2017. He has since released three more album tracks - Chinatown, For What It’s Worth and Greedy Soul.

“We had to get up and running in order to let him go out across the summer and play some new music that people would know, and then put the album in after that,” Christie told Music Week.

Gallagher, who signed a publishing deal with Warner/Chappell at the end of 2016, played a string of European festival dates over the summer, including well-received slots at Glastonbury and Reading & Leeds, and has a sold out UK arena tour scheduled for later this year.

“I've been delighted by how the music has resonated and how Liam's stepped up,” said Christie. “I feel like there's been a slight shift in public perception of who Liam is and what he represents, which I think has been wholly positive.

“We're getting some great reviews, which I'm delighted by because it's really important for Liam to have come back with a great album of music. The songs are great and reviews are beginning to reflect that, which is really pleasing.”

Produced by Greg Kurstin, As You Were is Gallagher’s first LP since the second and final Beady Eye album, BE, in 2013. Gallagher, who is being managed by his girlfriend Debbie Gwyther and UROK Management's Sam Eldridge, continues on the promotional trail today, appearing on The Chris Evans Breakfast Show on BBC Radio 2, followed by a pre-recorded performance on The Graham Norton Show on BBC One tonight.

“There are some TV moments to come and then there's no shortage of interviews for Liam to do,” added Christie. “In fact, we've been spreading things out and looking for interesting and new promotional hooks for him.

“I couldn't be happier with the way that Warner Bros and the team have risen to the challenge. Everyone has been energised by the opportunity of working with Liam.”