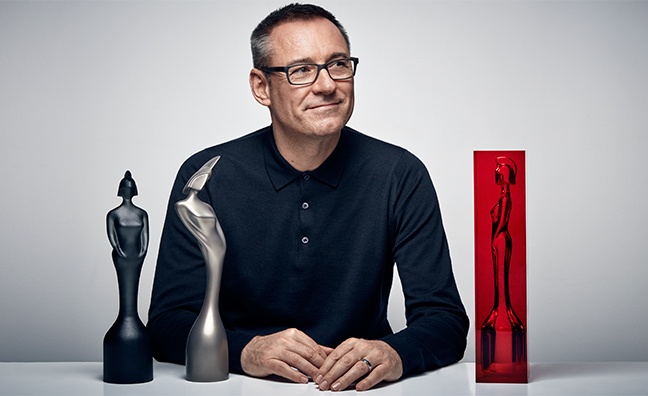 It’s here! BRITs 2019 day has finally arrived, with the entire music industry set to sack off work this afternoon and head for The O2 to party the night away to the sound of the best UK music around.

The buzz around this year’s event has been considerable, with everyone from BPI boss Geoff Taylor to Clara Amfo and YouTube’s Lyor Cohen talking it up.

But the ultimate responsibility for the show rests, of course, with BRITs chairman and Sony UK & Ireland boss Jason Iley. Iley stars on the cover of this week’s BRITs special edition of Music Week, talking us through his legacy as the event’s showrunner and looking to its future under whoever takes over once his three-year stint finishes at 10.31pm this evening.

This year sees a new set (courtesy of creative director Misty Buckley) and award (designed by Sir David Adjaye), although Iley still speaks freely of the “sleepless nights” caused by being in charge of UK music’s biggest showcase. But, as the event loomed, he still found time to sit down with Music Week to talk about the 2019 edition, TV ratings and why The Greatest Showman had to be on the show…

2018 wasn’t the biggest year for new UK music. Does that make your job harder?

“Of course. Actually, 2016 into the 2017 awards was very similar. But I’m very proud of what we collectively have been able to do for the show this year. It used to be quite formulaic and you could pretty much predict who would be on the show. But, by nature of it not being such a great year, you have to be more creative with the ideas you come up with.”

How do you do that?

“I’m proud as we look back over the years and the things we did with Rag’N’Bone Man and Jorja Smith, the collaborative side with Chainsmokers and Coldplay. And when I look at this year, we’ve managed to get Calvin Harris together with Dua Lipa, Sam Smith and Rag’N’Bone Man. You’re dealing with four of the biggest artists in the world and we’ve managed to get them all together. Collectively they would probably have sold in excess of 50 million records. By hook or by crook we’ve managed to come up with something mindblowingly amazing for the show. It will be one of those performances that we will talk about for the next 10, 20 years, it’s incredible. I also think doing Jess Glynne with HER is super clever and Little Mix are going to perform with Ms Banks. We’ve been smart in the collaborative ideas. I’ve always wanted to push the boundaries of what was expected from the show rather than just say, ‘OK, let’s have eight acts on, they sold more records than anyone else, and that’s it’. We’re eventising it.”

Is it still important that the event showcases UK artists?

“We should try and highlight success around the world and we also have to look at the fact that international records have such a major impact in our market. That part is still important, hence having Kendrick Lamar on last year and this year we’re going to give Pink the Outstanding Contribution award. You look at Pink, she’s sold 50m albums. We’re going to have an amazing end to the show because she’s quite frankly one of the best performers in the world. She’s phenomenal. I saw her at the Grammys a few years ago and I just literally sat there in complete awe of what she was doing. She’s unquestionably one of the greatest performers of our lifetime and she’s going to be the person who closes our show this year. It’s a good thing to have international acts as well as UK ones.”

TV ratings dropped last year. How important are they to the show?

“Clearly I don’t want to wake up on Thursday the 21st and see the viewing figures go down… But the reality is, they’ll probably be down again. If you look at the way that people consume TV properties, the numbers are getting less. We had six million the first time I did it, five million the second. We know the TV audience numbers are going down. But if you look at the [BRITs official music app] YouTube ecosystem, the streaming capability and the fact that they’ve also just launched a new music platform, it felt like it was right for this time.”

Presumably The Greatest Showman opener should press the right buttons with an ITV audience though?

“I hope we do that across the board. You’re trying to reflect the year that has been, trying to be incredibly creative with the collaborations. We’re not going to ignore the fact that Showman was the biggest album of the year. I’m delighted that we’ve managed to work with Warner Music and Hugh Jackman’s management to get Hugh to come over and do the show. That is going to be an incredible and unique moment that we haven’t seen before. It’s going to be really exciting. It will probably surprise people. I hope so, because there can be an element of snobbery about which acts perform and which don’t. I’d rather people focused on how great it can be than trying to find fault with what we do. How can you ignore the biggest-selling record in the world?”