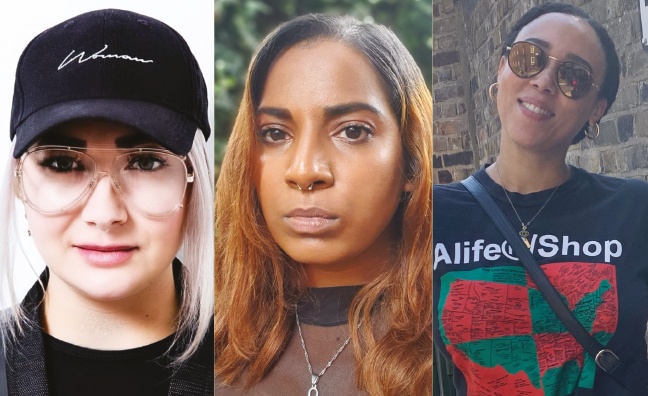 Executives in the independent sector have spoken to Music Week about the need for change as the industry faces up to the fight against racism and inequality.

Nadia Khan, founder of Ctrl Management and Women In Ctrl, said that “everybody in independent music can action change, regardless of their size or resources”.

Khan (above, left) recently published the Seat At The Table report, which investigated 12 music industry bodies and highlighted a lack of female representation in leadership positions, with three female CEOs, and one female chair across the 12 organisations.

While she noted an increase in diversity across recording artists and genres in the indie world, Khan called for organisational change to match.

“As the music industry has moved towards more label services and distribution deals and with many more self-releasing artists in the independent sector, ownership and control has been put back into artists’ and managers’ hands,” she said. “This has led to a greater diversity of music and artists being represented.”

“Diversity needs to also be reflected within the teams managing campaigns at independent labels, all the way through to senior management and board level, and to those that are controlling budgets and spending,” Khan added. “As highlighted in the Women In Ctrl report, the disparity still runs high for women, and especially black women.”

“Through my 16-year career as a manager, I struggled to get support, budget and backing for black artist projects, being told the market was too small and restricted to ‘London and maybe Birmingham and Manchester',” she said.

“Support and a welcoming arm into the industry were only offered after I had achieved multiple Top 20 successes independently and grown an international brand. I would like to see that support offered to those in the early stages of their careers.”

Former Secretly Group head of radio & TV in the UK, Jess Kangalee now runs Good Energy PR and is part of the independent arm of the Black Music Coalition. During lockdown, Kangalee (above, centre) conducted online diversity workshops and told Music Week that, in her experience, the indie sector has “massive diversity problems”.

“It’s predominantly a straight, white space with a small fraction of people of colour and openly queer people,” said Kangalee. “I have only met one person in the sector that has a visible disability.”

“At the start of my career, seeing women at all felt like a luxury, so it has been a positive to see more (white) women inhabit these spaces,” she continued. “However, going from seeing one woman of colour to seeing 10 in these spaces over 10 years is hardly any achievement to be proud of, especially when the majority of these women sit in junior and mid-level roles.”

Acknowledgement is very necessary, but it is a completely rudimentary step

Kangalee went on to say that music companies recognising the need for action is not enough.

“There is more of an air of being able to talk about these problems, but I have still seen people penalised for doing so and no great changes made,” she said. “Acknowledgement is very necessary and important, but it is a completely rudimentary step and I would have hoped that by 2020 more proactive steps would have been taken.”

Kangalee said that “racist behavior is constant” and that “microagressions happen every day”.

“Two examples that have happened frequently to me and that I’ve seen happen to other people of colour are when white people mix up the names of two people of colour that do the same job or work at the same company, even though they look nothing alike and have completely different ethnic backgrounds,” she said. “The other is, at gigs when a white person asks, ‘What are you doing here?’ – translation, ‘You have dark skin so you can’t like guitar music’. No one would go up to a white person at a black music show and ask them why they were there, so why is the reverse deemed acceptable?”

Kangalee added that “tokenism is a problem across the board” and called for “acceptance of wrongdoing and bad treatment, apologies, immediate action, public commitment to change and long-term planning”.

“We’ve really hit a point in the past few months where visibility of a much more diverse range of people, artists, music is key to genuine change and progression,” she said. “There needs to be pressure on us all to actually do better – not just post about ideology.”

Adebiyi urged the sector to engage in “tough conversations and trust newer creatives with opportunities to grow the pool of people who can execute campaigns”.

“Elevating different voices into positions of real power within companies needs to keep happening,” she said. “Diversity regarding personnel has tended to feel tokenistic and often relegated to more minor jobs within companies, we must work to elevate people beyond supporting roles and into positions that have the power to effect and sustain long-lasting change.”

Khan, Kangalee and Adebiyi were speaking to Music Week for our Indie Takeover special issue. Read the full report on the indie sector in 2020 here. Read AIM’s Gee Davy on the fight for equality here.