Instant classic? Mercury KX's Alexander Buhr on why a new breed of composers are free scoring 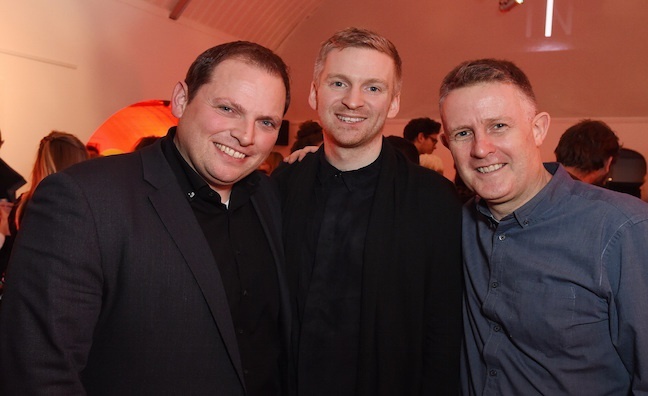 Last year Universal’s Decca launched it’s “post classical” imprint, Mercury KX with a roster including Icelandic composer Ólafur Arnalds, Luke Howard and more. This reboot of the Mercury Classics label has focused on composers and artists who have been called “neo-classical” – artists who merge classical and electronic sounds – although many of those involved object to the tag. Having recently collaborated on a festival with their new neighbours, London’s Central St Martins College, following Universal's move to new offices in Kings Cross, Mercury KX managing director Dr Alexander Buhr (pictured right with Ólafur Arnalds' and Universial president and CEO, Global Classics & Jazz, Dickon Stainer) spoke to Music Week about this increasingly popular genre and his label’s future...

In November Mercury KX got involved with Central St Martin’s Metaphonica IV festival, how did that collaboration come about?
"We teamed up with Central St Martins because the idea of bringing music and different art forms together in an environment where creativity meets on a student and a professional level was super interesting. Metaphonica used to be students only, so we teamed up with them to bring people in to make it a bigger, to make it a more immersive experience. We put on performances by Anatole, an electronic artist from Australia, and Lambert who is more piano-based neo-classical musician. We also brought in Wayne McGregor’s dance company as we are working with them on a project, and we also have Ólafur Arnalds' Stratus piano [installation], which he has been developing for Re:Memember, the album we just put out on Mercury KX. We set that up in a room like an exhibition piece. That was interesting because he developed it as an instrument but it’s also a piece of art by itself and it allows people to interact. Then in another room we had art from the Central St Martins students, video installations and art and performance. It was a crazy creative mix of things. It was really cool."

Was your involvement inspired by Universal's office move to Kings Cross this summer?
"Yes, they are our new neighbours. It’s an interesting environment. The college is a building filled with creativity and there’s such a wide variety of what they do, so when you go to exhibitions there you never know what you’re going to get out of it. Creativity is going in all directions.The Mercury KX label is about being experimental and opening new doors, not being too stuck by limitations, so we felt it was a great fit. Our artists loved it, which is always a good sign."

Your label has many artists and composers that are being called neo-classical, yet it seems that tag is unpopular with the people actually making the music, why is that?

"It’s interesting. Very often conversations about a genre start with conversations about how the name is not very suitable. It’s almost always the first thing to go through when you talk about this music. Many artists don’t associate themselves with the classical genre or the term neo-classical, they don’t see any connection to that, but it’s widely acknowledged as the best term we have to describe what this is. When we set up Mercury KX, I deliberately set it up without any connection to traditional classical music. It was not supposed to have ‘classic’ in its name because my thinking was it would be a genre-blending space, not only one thing or the other."

What kind of audiences are you targeting with your releases?
"We did a big piece of audience research in the UK last year because we wanted to better understand what the audience is who are interested in this music. The fascinating thing you discover very quickly is there’s a wide group of audiences coming at it from different sides. There are those from a more classical background who look at Ólafur Arnalds’ music as a version of a cool night out, it’s close to the classical music they like. Then you have people who are diehard EDM fans who see it as an extension of that space, from Bonobo or Jon Hopkins. Then there are those who come from a Radiohead, Pink Floyd kind of perspective. They are people who all equally love this music, but they come at it from very different perspectives. Some would associate with a term like neo-classical, others wouldn’t."

Do you believe there is a long-term audience for this kind of music?
"We do it because we believe in it and we know there’s an audience. Ólafur Arnalds has played a solo show at the Royal Albert Hall in May and two Palladium shows in October and they were all sold out. There clearly is an audience for this. It’s an audience that comes from quite different parts of the spectrum of musical genres. That is very exciting because you get to build something new. The artists are so excited because it allows them to experiment and overcome certain boundaries that you sometimes have when you try to work in other musical formats. There’s a creative freedom this allows which is really exciting for everybody."

What impact has streaming had in attracting an audience to this more experimental genre?

"It’s not a coincidence that it ties in with the rise of some of the big artists. When you think how easy it is in the streaming environment to sample and try out different things and switch between genres and musical spaces. Now you might just put on a playlist or go down the rabbit hole on YouTube and you find stuff. People are much more open to taking in experiences on different levels. It feels less about genres and it’s more about an aesthetic experience. The live experience is very important too though. That’s why we did Metaphonica in the first place. We put things next together that on the surface are very different – dance, jazz, neo-classical, art performances – because it becomes one aesthetic experience. There’s a sensitivity of craftsmanship, seriousness and connectivity. I think that’s where this is heading. You see similar trends in jazz, it’s exploding too."

"We signed Sebastian Plano who is a cellist and is an amazing creative talent. We are releasing his album Verve. Then Anatole who is an electronic artist. We’re also working Guy Sigsworth, the producer [who has worked with Björk, Madonna and Seal among others]. He was a harpsichord player in his first life and is this amazing creative guy we’ve done an album with. It’s quite a mix, and we’re working with [choreographer] Wayne McGregor on a project around a ballet so there’s a big variety of things plus some new artist. Ólafur Arnalds' album re:memeber will keep going, and we have a few live events in the making."