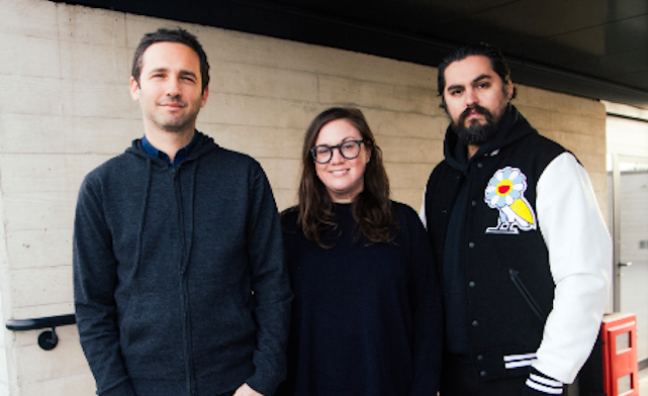 As exclusively revealed in this week's Music Week, Island Records has announced its first major appointment since the senior management restructure of summer 2018. Following on from Louis Bloom taking over as president of the legendary label last year, Music Week can reveal that Daniel Lloyd Jones will be joining director of A&R Annie Christensen as co-head of A&R from January 2019.

Speaking about the appointment Christensen, who was promoted to A&R director at Island Records last year, said: “Louis and I wanted to take stock and look at how we could grow and develop the A&R department. Daniel has been a great friend of mine for many years and I have always admired his ears, his ability to win a deal and his unrivalled connections across the industry.

"I instinctively felt that the combination of the two of us running the A&R team at Island would be an incredibly exciting and potent one. Dan has a wealth of experience in the business – with an enormous number of successful publishing signings under his belt, both during his tenure at EMI Publishing/Sony/ATV and more recently at Downtown Publishing. Thankfully, when I put the idea to him he was full of ideas and we immediately began mapping out our future vision. We are both thrilled to be working together and very ambitious for what is it come.”

Island president Louis Bloom added: “Daniel Lloyd Jones is a complete force of nature, probably the most tenacious A&R guy I have come across in the business. When Annie came to me with the idea it was one of those where I just thought, why didn’t I think of that.  They have such a fantastic relationship and I know that together, in the highly competitive A&R world, they will form an irresistible duo and be a huge magnet for any artists/ managers out there.”

Daniel Lloyd Jones is a complete force of nature, probably the most tenacious A&R guy I have come across in the business

Across his career, Lloyd Jones has worked for a host of companies, ranging from PR at Warners Brothers (where he worked on Gnarls Barkley, My Chemical Romance and Biffy Clyro) to venturing into publishing when he joined Sony/ATV Music Publishing/EMI Music Publishing, eventually rising to vice president of A&R. In his tenure, Lloyd Jones signed two-time ASCAP Songwriter of the year Taio Cruz, PJ Harvey, Plan B, and Joy Williams from The Civil Wars. Other notable signings include Pendulum, Knife Party, Nero, You Me At Six, Gorgon City, The Maccabees and more recently Bugzy Malone, Tom Grennan, Stefflon Don and Island’s own Norwegian pop sensation Sigrid.

Speaking about his move to Island, Lloyd Jones said: “Both Annie and myself started in the business as assistants around the same time over 15 years ago and have worked our way up. We aren’t scared of hard work and that has bonded us over the years, she’s one of my closest friends we’ve always fed off each other’s passion, enthusiasm and taste. What I admire about Annie and Louis is their loyalty to Island and how passionate they are about the label, its ethos, their family (staff) and their ability to break artists who aren’t obvious, artists who are unique that they work in tandem with to reach a wider audience.

He continued: “I adore A&R and love winning deals and developing artists, I’m obsessed with it, I’m always thinking about the process of A&R and how we fit in and where we need to adapt and evolve and how important having your own brand of A&R is. It’s an honour to be asked to stand alongside my friend who I respect immensely. Annie is one of the shining lights of our industry and I’m lucky to be going into battle with her on a daily basis!”

For the full exclusive story, including the only interviews with Lloyd Jones and Christensen, see this week's print edition of Music Week or click here. To subscribe and never miss a vital music biz story, click here.