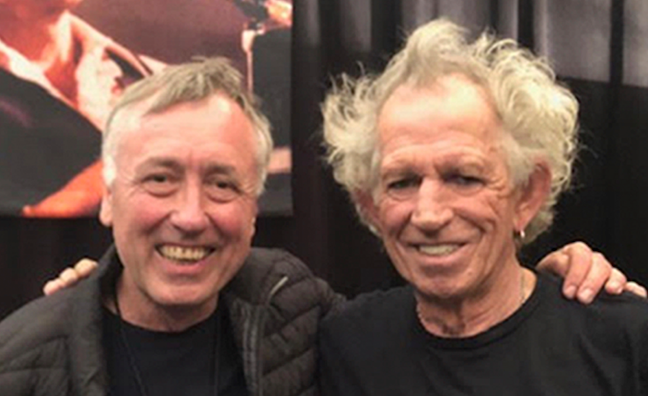 The catalogue - comprising his 1978 debut solo single and four albums from 1988-2010 - will be united with the The Rolling Stones guitarist’s publishing. Richards and Sir Mick Jagger signed a publishing deal with BMG in 2013.

In celebration of the 40th anniversary of Richards’ debut solo release, a 1978 recording of the Christmas classic Run Rudolph Run, BMG will release a limited edition 12” on red vinyl, remixed and remastered by longtime collaborator Steve Jordan. The November 23 North American Record Store Day exclusive includes a cover of Jimmy Cliff’s The Harder They Come, a version of Pressure Drop featuring Toots & The Maytals and a “Santa Keith” holiday card featuring a greeting from the guitarist.

BMG CEO Hartwig Masuch (pictured with Richards) said: “It has been a pleasure to build a relationship with Keith and his exceptional team over the past five years. It is a real honour now to extend that relationship even further to work with his classic solo releases.”

Keith Richards said: “Looking forward to working with Hartwig Masuch and everyone at BMG.”

BMG EVP global catalogue recordings, Peter Stack, said: “This agreement paves the way for a  reappraisal and repositioning of the solo work of one of rock ‘n’ roll’s true originals and arguably its most pre-eminent guitarist. Fans can expect a programme of releases which truly does justice to these great recordings.”

The Record Store Day exclusive follows BMG’s digital re-release of Richards’ solo albums Talk Is Cheap, Main Offender, and the studio/live compilation Vintage Vinos. Forthcoming physical reissues will include deluxe and expanded CDs and LPs, boxsets, and additional special projects, including the first ever digital release of Live at the Hollywood Palladium, December 15, 1998.

Released in 1988, Richards’ debut solo album, Talk Is Cheap, featured the Top 5 US rock hit Take It So Hard.

The Rolling Stones recently signed an expanded and extended deal with Universal Music.