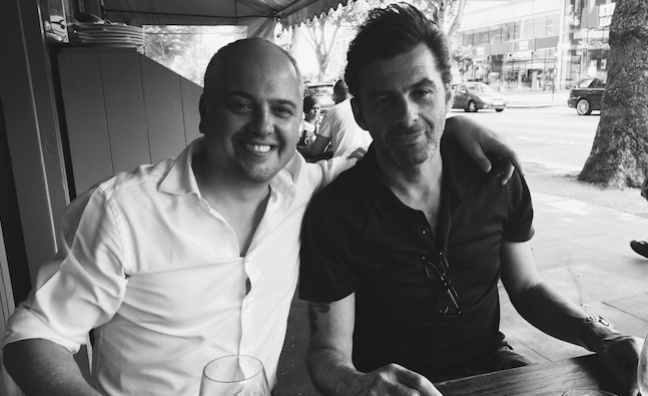 A year on from our exclusive news of the joint venture between management firm Prolifica and PIAS, both sides have spoken exclusively to Music Week about the progress of the label.

Prolifica Inc scored a Top 10 album last month with Circa Waves’ What’s It Like Over There? The band, formerly signed to Virgin EMI, have so far sold 7,449 copies, according to the Official Charts Company.

As revealed in the latest issue of Music Week, Prolifica Inc has global ambitions for the return next month of Two Door Cinema Club, who are also Prolifica management clients. PIAS MD Jason Rackham is targeting a No.1 for the album, False Alarm, which is out on June 14.

“Our first release was Circa Waves, which was our first Top 10 album, of which we are very proud,” Prolifica co-founder Stefano Anselmetti (pictured, right) told Music Week. “The JV is working fantastically well, it’s obviously people we’ve worked with for a long time across campaigns, so it was good to go back into a system that we all knew and trusted. It’s been very creative, very fulfilling, much more fun than previous campaigns. We had a great launch and great release with the band internationally across territories.”

Anselmetti and Prolifica co-founder Colin Schaverien (pictured, left) focus on A&R and the creative side of the campaign, while PIAS provides the international muscle for distribution and marketing.

“That was the main reason behind us striking the JV with PIAS, because we found that in terms of their international infrastructure it was superb,” said Anselmetti. “We worked with them previously on the first Two Door Cinema Club albums and on various projects such as Maximo Park. It feels that there are proper music people at the helm in each territory and that brings a real value to us as independent, music-minded people.”

Rackham added: “They have a definite vision of where they are going. I don’t think they are going to release tons of records, they are going to be very focused. These two campaigns [Circa Waves and Two Door Cinema Club] are going to take a lot of time and effort and focus. They are looking at other opportunities and acquisitions, but right now it’s all about those two artists and developing these campaigns.”

Prolifica Inc has already had airplay success with Two Door Cinema Club’s lead single Talk, which was playlisted at both BBC Radio 1 and Radio 2 and has made an impact across Europe.

“There’s a little bit of a lack of understanding about how big PIAS is internationally,” said Schaverien. “They have got 40 people in their office in Belgium, 60-plus in Germany. They are a heavy-hitting, massive independent infrastructure. We’ve worked with these guys a long time and they’ve got that ethos which we’re attracted to in terms of everything feels very bespoke.

“We have a direct line into people, whereas the reality is that when you’re working with a major label normally you’re going through an international product manager, and there’s a little bit of a distance there. What we’ve tried to do is close that gap so we can have more collaborative, creative conversations.”

Rackham said the JV underlined a greater emphasis for PIAS on closer relationships with its label partners.

“It’s certainly something that’s becoming more and more part of the DNA of the company,” he told Music Week. “In our relationships with a number of independent labels through the Cooperative business model, we have these very close partnerships where we invest in the labels and help them grow their repertoire. It’s building the repertoire in [PIAS'] business, which in the market at the moment is important because it’s very stabilising.

“The company completely values our longstanding distribution relationships and partners and it’s a huge part of our business. But at the same time, it doesn’t mean it restricts us in other areas in terms of growing repertoire and growing rights and developing our relationship with other labels that help build the catalogue of the company.”

To read the Two Door Cinema Club story pick up the latest issue of Music Week – or subscribers can click here.