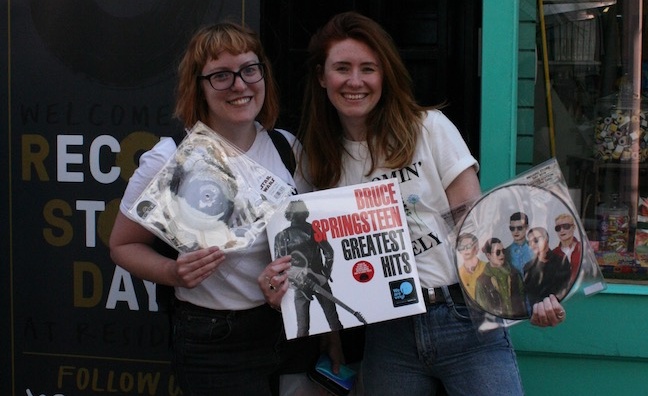 Based on OCC figures, the estimated value of vinyl sales was up 16% compared to last year’s Record Store Day. The majority of the 240-plus shops taking part reported sales increasing by between 10% and 20% year-on-year.

“Finances wise, we were about 15% up on last year – a total which at the time we thought could not be surpassed,” said Jon Tolley of Banquet Records in Kingston. “Credit has to be passed to the labels and to ERA giving us fuller information at an earlier time so we could prep properly. On the day it was great. Of course the weather helped, and the campers had their usual Friday night party. But it’s great to see so many customers queuing and treasuring their new records. And of course, it means people were forced to come into the shop they might often walk past. While RSD Saturday was hands down our busiest day of the year, Sunday was the second, Monday the third, Tuesday the fourth and so on. It’s a great shot in the arm for the books, a great advert for record shops, and a great buzz for customers.”

Record Store Day, which marked its 10th anniversary in the UK this year, has played a major role in the vinyl revival and continues to attract new stores to the campaign.

Rachel Lowe, of Brighton store Vinyl Revolution, said: “Our first Record Store Day exceeded all expectations, it was the best day we’ve had since opening and was terrific fun. We opened our door to a long queue of regular customers but the day’s events (live BBC radio show, live music outside the shop and support and promotion from neighbouring shops) attracted a ton of new customers too. Our youngest first time record buyers were aged four and six. The revenue from Record Store Day will help our young shop immensely but the publicity and goodwill will last much longer. A fabulous day. Roll on next year!”

Drew Hill, MD of distributor Proper Music Group, told Music Week they put in a “tremendous team effort” to fulfil the RSD orders for the day.

“We shipped over 36,000 records ahead of the event and will continue to ship more out as shops are continuing to satisfy the demand for all these amazing releases,” he said. “Interestingly, we’ve heard from a couple of shops that they did more business on RSD Saturday than the whole of December. Talk about Christmas coming early!”

According to Music Week’s charts analysis, vinyl singles sales were down on the same week in 2017 by 30.65%. However, the focus of RSD has shifted towards albums and the sales boost helped several LPs make an appearance in the official album chart (April 27), including David Bowie’s Welcome To The Blackout (Live London ’78) at No.22.

There were also chart appearances for new vinyl releases of Pink Floyd’s The Piper At The Gates Of Dawn and The Courteeners' debut album St. Jude, as well as The National’s Boxer: Live In Brussels. Arcade Fire’s eponymous 2013 EP made the Top 75 for the first time after being released on blue vinyl for RSD. Fifteen albums sold upwards of 1,000 copies on vinyl, compared to eight following last year’s Record Store Day.

The Top 20 RSD singles and albums are below, though any sales rundown does also reflect the varying quantities issued for each vinyl release.