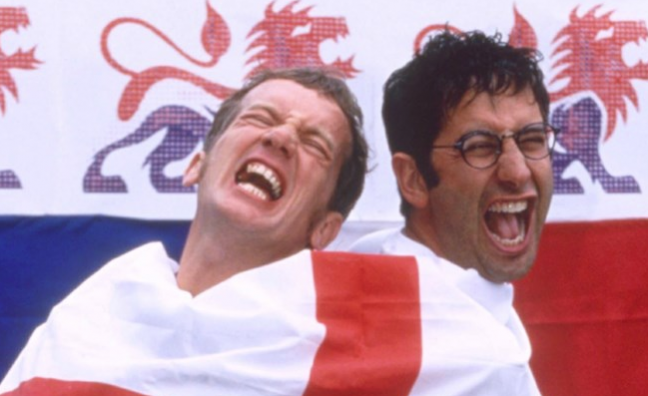 It may not stick around long in the upper reaches of the chart in the wake of England’s World Cup exit, but Three Lions is back at No.1 again.

The 1996 football anthem by Baddiel, Skinner and The Lightning Seeds was ahead in early sales flashes and powered to No.1 with sales of 79,779, according to the Official Charts Company. That tally included a robust download sale of 43,369.

While Three Lions had huge audio streaming (6,775,416) and video streaming (5,228,120) figures for the week of England’s semi-final against Croatia, it was subject to Accelerated Chart Ratio (ACR) rules by the OCC as it was not an actively promoted track.

Despite the imposition of ACR, Three Lions still managed to hold off George Ezra as it surged from No.24 to the chart summit. With sales of 76,253, Shotgun came close to retaining No.1, though Ezra urged fans to get the football anthem to the top again. It was a win-win for Sony Music, which released both tracks.

Three Lions has now been No.1 on three occasions – four if you count separate appearances at the summit in May and June 1996.

Phil Savill, MD commercial group, Sony Music, said: “Obviously we’re totally gutted that England didn’t make it all the way to the final but absolutely delighted to see Three Lions back at the No.1 spot for the third time. It really is the definitive England football song that has stood the test of time, and thanks to the omnipresent power of social media the fans embraced it for this tournament in ways they have never been able to before.

“The players gave us the hope, Three Lions gave us the belief that this time it really was coming home. Sadly, the dream was shattered but full credit to Baddiel, Skinner and Broudie for writing a modern-day national anthem.”

Vindaloo (No.41) by Fat Les and World In Motion (No.48) by EnglandNewOrder are also back in the Singles Chart.