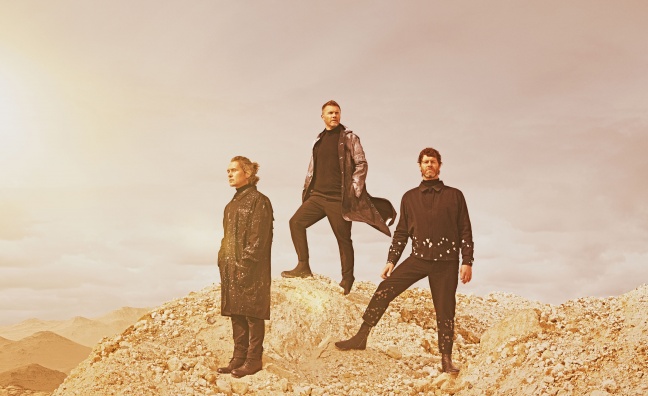 Take That have lit the blue touchpaper on Q4, with their “reimagined” Greatest Hits album Odyssey (Polydor) already the fastest-selling artist album of the year after just three days on sale.

Yesterday’s Midweek Chart Update from the Official Charts Company showed the superstar manband – Music Week cover stars last week – had moved 89,408 copies by the end of Sunday, with a clear bias to physical sales (84,745) over downloads (3,977) and streaming (686). That’s more sales than the previous fastest-seller of 2018, Arctic Monkeys' Tranquility Base Hotel & Casino (Domino), which sold 86,359 in a full week.

Polydor co-president Tom March had already predicted the album will become the first 100,000+ seller of the year, and Odyssey is on pace to achieve that. So Music Week sat down with March – enjoying a stellar year, in partnership with co-president Ben Mortimer, which has seen the Universal label scoop the A&R Award at the Music Week Awards and top the market shares in Q3 – to talk Greatest Hits albums, streaming and what comes next for Gary Barlow and co…

Why was it important to not just put out a standard Greatest Hits album?

“The world has moved on, the standard hits album has moved on. For them, it was not just about looking back, they also want to look forward. Hopefully, this is the perfect blend of moving forward whilst one eye is on the past as well. Their fans are going to love them no matter what. So we need to excite their existing fanbase, give them something they haven’t had before, give them something new and hopefully great promo shows the great content the guys have created.”

Their sales are traditionally very physical heavy. Will this project help change that?

“We’ve got some fantastic plans in place with Apple Music, Spotify and Amazon. All of the partners are very keen to have the guys involved. Our hope is to start to move some of the audience onto those services. Trying to make  the soundbed for the TV ad for Odyssey was an embarrasment of riches! It’s a phenomenal catalogue to have the option to play with.”

How do you make that catalogue work in the streaming age?

“When we were first discussing the best way to celebrate 30 years of the band's incredible career, what was immediately evident was that we all – band, label and management – wanted to be bold and brave and to innovate. A standard Greatest Hits album in the modern era felt tired. Taking inspiration from The Beatles’ Love album where some of the band's best songs were beautifully re-interpreted, Take That collaborated with Stuart Price to create a non-stop musical journey through their greatest hits, bringing the excitement and energy of their spectacular live shows to the album. Our aim is to be future-facing while embracing the band's incredible catalogue. The campaign will be full of moments of nostalgia for their fans but will also give them something brand new to love. We're expecting to sell huge amounts of physical records whilst also reinvigorating their catalogue on streaming services and have fantastic plans in place with all the partners.”

Where do Take That go next?

“Take That's three decade-spanning career is testament to a band that are capable of constantly evolving, re-inventing themselves and embracing the times, taking their existing audience with them while winning over new generations of fans. Whatever they do next, it will be big and bold and continue to assure their legacy as one of Britain's most-loved bands.”