'It's my responsibility to make sure UK acts get a look in': Darcus Beese on his US Island plans 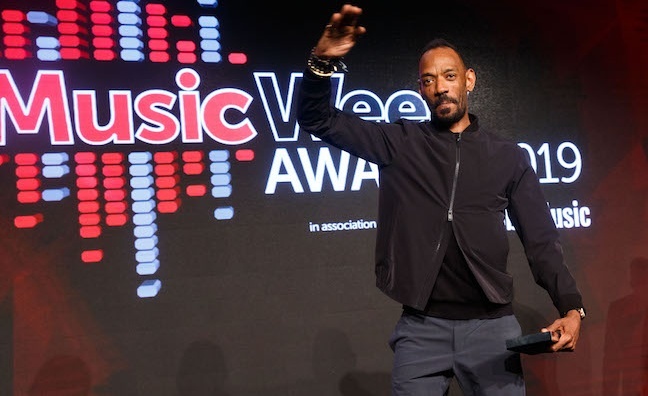 Fresh from receiving The Strat at this year's Music Week Awards, Darcus Beese has spoken about his plans to help UK artists conquer the US.

The Island Records US president spoke exclusively to Music Week after picking up the special award from Dizzee Rascal – one of the UK talents he's worked with extensively.

And the exec, who initially joined Island in the UK in the late '80s as a 'teaboy' in the promotions department before becoming its president in 2013, explained his plans for the label now he's on the other side of the Atlantic. Having spearheaded sucess for a raft of acts including Amy Winehouse, Mumford & Sons and more, Beese's track record speaks for itself. Read on to find out his plans to replicate his UK success in America.

Which of the artists you worked with in the UK you’re looking forward to taking over to the US?

"All of them. Your ambition for all your artists is for them to be global and hopefully now that I’m in the States, it should be part of my responsibility to make sure UK acts get a look in."

How do you feel about the talent you’ve left behind in the UK?

"They’re all in good hands, the world is with them now. It’s their journey, it’s their phase, it’s their era."

Island in the UK is renowned for the maverick culture it inspires with both staff and talent. Can you replicate that in the US?

"Well, the proof of the pudding will be in the eating. Let’s talk in three years time."

Back in the day, you used to be able to have a hit single and not sell a ticket

"Fuck yes, but you’ve got to know how to be independent-minded in a corporate set-up."

The American market is very streaming-led, is that good for UK acts?

"Yeah, because it levels the playing field. If you’re doing something good then, well, everything is an algorithm right, but you just got to make global records."

You mentioned algorithms, now A&R people use all kinds of data. Has your approach to A&R changed?

"Not at all. I think you always have to have a mixed portfolio, you’ve got to think about how you have career artists, and career artists who go against the grain and are not necessarily the records that stick on the radio or are Spotify streaming fodder."

What do you think of breaking artists in the UK these days? Is it still healthy?

"It’s healthy, but it’s a different type of healthy. A break used to be about how many units they used to sell, and it’s a culmination of stuff now. Back in the day, you used to be able to have a hit single and not sell a ticket. Nowadays, kids can sell out Brixton Academy but not have a hit single. It’s up to people how they measure success."

You’ve worked with U2 a lot over the years, do you think we could see a band at that level again?

"Yeah I hope, everything is cyclical. If you’re following what you think the streaming model is, rather than what you think the political landscape is or what is in your heart, then don’t be in a band. For me, with Brexit, with Trump, immigration, knife crime, I’m surprised there aren’t more bands. Watch out for [rapper] Scarlxrd though."

Click here for all the winners at the Music Week Awards and here for the social media reaction.

To read our recent cover story with Darcus Beese, click here. And for the full story of how Beese is working with his UK successor, Louis Bloom, to create transatlantic hits, see this week's print edition of Music Week, available now.