Overnight news from around the world: Thursday, October 20 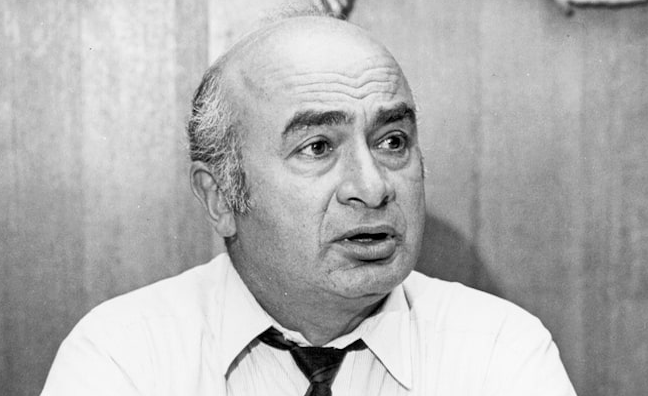 Phil Chess has died at his 30-acre ranch in Tucson, Arizona, at the age of 95, according to his daughter Pam, quoted by the Chicago Sun Times. Chess, born Fiszel Czy?, and his brother and label co-founder Leonard – who died in 1969 at 52 – were Jewish immigrants from Poland who arrived in America in 1928 and moved to Chicago. After running a club, the Macumba Lounge, they started Chess in 1950, aiming to reflect the burgeoning local blues scene. The first release on the new label was the 78 rpm single My Foolish Heart by jazz saxophonist Gene Ammons, out in June 1950. The label went on to achieve international renown and is credited with helping to invent rock 'n' roll.

The rights management and music service company has hired former BMG US president of marketing & creative Laurent Hubert to run its new B2B platform division. In this new role as president, platform and investments, Hubert will “oversee the roll-out of Kobalt’s unique services and powerful technology advantages to other content owners,” according to a company statement. Formerly based in New York, Hubert will work from Kobalt's offices in Los Angeles and run its newly formed B2B rights management platform. He reports to Kobalt founder and CEO Willard Ahdritz. Hubert left BMG earlier this year and was replaced by Zach Katz. Hubert's function is two-fold: He will promote Kobalt's services to the wider industry, and he will chair its investment committee and become a board member of Kobalt Capital, the advisory company for Kobalt’s fund business.

Amazon to take on Apple with Garth Brooks exclusive

Amazon Music Unlimited has announced its first foray into the world of streaming exclusives with US star Garth Brooks, just one week after launch. Last week the company announced streaming service Amazon Music Unlimited, and it hasn’t taken long to make its presence felt in the market. The exclusive deal will see Brooks’ music made available on streaming platforms for the first time. As of yesterday (October 19), Amazon Music Unlimited subscribers can stream latest single, Baby, Let’s Lay Down And Dance from his upcoming new album Gunslinger, as well as The Ultimate Hits and the two-time Diamond-selling album Double Live. All songs on Double Live will also be available on Prime Music.

UMG has announced the official opening of a new studio in Sydney. The boutique studio, located next to Universal's Australian HQ in the inner city suburb of Woolloomooloo, is the city's newest high-tech recording facility and purpose-built media centre. Designed by Michael Fronzek, it is the latest addition to the international group of recording premises - which includes Abbey Road, Captiol and Interscope - operated by the company and will serve home-grown talent and touring artists.

Controller of BBC Radio 3, BBC Proms and BBC Performing Groups Alan Davey has committed to several different initiatives to increase diversity and inclusion within classical music. Speaking yesterday (October 19) at the inaugural Diversity And Inclusion In Classical Composition conference at Manchester's Royal Northern College of Music, Davey promised "real action". He revealed the station would expand its canon to be feature unjustly neglected composers, reappraise the commissioning process and commission a new work for Chineke Orchestra. He also committed to reconvening the conference to ensure continued action.

Music business trade event Midem has created its first ever Advisory Board comprised of top executives. The board's principal purpose is to collaborate with Midem and offer guidance on  strategy and development for next year's 51st edition, which takes place in Cannes from June 6-9 2017. CEO, international and global commercial services at Warner Music Group Stu Bergen, Scott Cohen, founder and VP of The Orchard and Sony/ATV president Nicolas Galibert are among the members of the new board.

Glen Rowe, Muse tour director and founder of Cato Music, has been appointed managing director of Backstage Academy, the Yorkshire-based live industry centre of excellence for future generations of touring pros. Rowe brings 'roadie school' Cato Academy under the Backstage umbrella and the two academies will continue to offer short courses and degree-level qualifications to those wishing to work in the live sector. Earlier this month, Rowe won Tour Manager Of The Year at the Live Music Business Awards.

The Music Week Sync Awards take place tonight at Bloomsbury Ballroom. The music business is set to descend on the central London location to recognise the work of sync teams from publishers, labels and agencies, as well as music supervisors and individual syncs. For more information visit www.syncawards.com.