Panel shows: The best of The Great Escape's conference programme 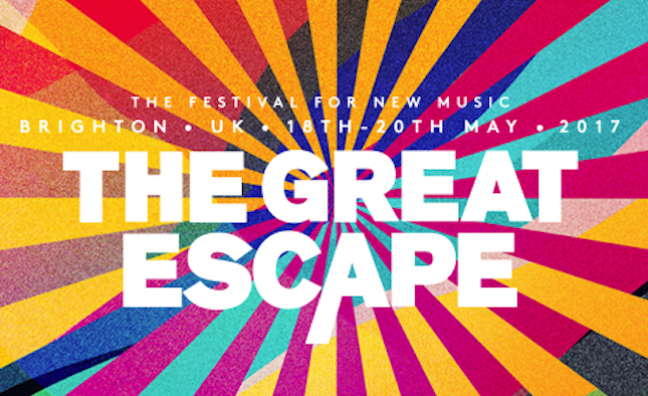 Delegates aren’t hard to spot at The Great Escape, largely because the large plastic laminates hanging around their necks flap in the Brighton breeze. These are the industry types, here to work as well as rove around watching bands and having fun. On Thursday, many take shelter from the rain at Komedia, to hear discussions on drugs in music and the state of the media.

On Friday, such is the rush to hear the PPL and others dissect the tangled web that is royalties, that many end up sitting on the floor. The scrum – which includes Beggars Group boss Martin Mills – proves the business is (unsurprisingly) keen to know where the money goes.

As well as interviewing Music Glue founder Mark Meharry and chairing a lively panel set up by Urban Development, Music Week was listening in at The Great Escape’s convention throughout the festival. Here’s the lowdown on the standouts from TGE 2017’s conference programme.

We begin with Friday afternoon’s Urban Development Industry takeover seminar at The Old Courtroom. Under the lights were Alex Boateng (head of urban, Island Records), Tasha Demi (product manager, Polydor Records), Zeon Richards (director, Renowned) and Joss Meek (head of digital, Wired PR). Prompted by 2017 developments such as the creation of Island’s Urban Division and Stormzy’s distribution deal with ADA, the panel set out to discuss urban culture’s relationship with the record industry. Boateng’s anecdotes about the days of pirate radio and Richards’ smiling explanations of just how this movement has got so big (“It’s about passion and hard work”) underline that we’re experiencing something of a golden era, but the panel agree that there’s still work to be done on changing perception. Meek spoke of “pre-judgements and misconceptions” based on artists’ backgrounds and the media’s tendency to lump genres like R&B, UK rap and trap under grime’s umbrella. Demi stressed the importance of digital platforms too: “We need to get it out there that you can monetise your music through streaming - it's a part of the bigger plan.” But the overriding impression was one of an unstoppable force, driven first by the artists, but with a network of like-minded industry execs behind them, all willing to pitch in on someone else’s campaign, lending help or expertise wherever it’s needed. Not only is now a good time to be in and around urban music, but the future’s looking good too.

We’re with the band

On Saturday, a supergroup gather at The Old Courtroom. Joining moderator Imogen Heap are Dave Rowntree (Blur) Jeremy Pritchard (Everything Everything) Pete Turner (Elbow) Shingai Shoniwa (Noisettes) Ninja (The Go! Team). But they’re here to make conversation rather than music, to unpick what it’s really like to be in a band, the product at the industry’s mercy. We get horror stories from Shoniwa (about a company called Dodgy Management, no less) and hear how Blur were duped into losing thousands while the band was in its infancy. After doing their best to shed some light on how it really feels to schlep round the world with the same few people year after year, Pritchard decides “you can’t truly understand what this life is like unless you’ve experienced it”. Hearing Ninja’s relief at being able to confide in like-minded souls is revealing, there’s more to being in a band than the glitzy rock’n’roll stuff. Rowntree is the only one to admit to a keen interest in the business side, but all agree that it’s increasingly important that artists know where they stand. Which brings us nicely to the Featured Artists Coalition, organisers of the panel and campaigners for artists’ rights. In her closing comments, interim CEO passionately underlines why the FAC matters. “Discussions like this are important,” she says, “Without the artists there would be no music industry, there would be no songs.”

Has pop music become disengaged with politics? Why is there a lack of politicised music in the charts? Can music still make a difference? These are just a few of the questions Louder Than War’s John Robb has under his arm for TGE’s annual Pop Question Time. David Dimbleby would surely agree the discussion is worthy of the name. Founder of the Tru Thoughts label Robert Luis reveals how Public Enemy’s records altered the views of some “casually racist” pupils at his Essex school, while Pritchard – sitting for his second panel in a row – seems torn on whether music has the same power to change things these days. After some wrestling, he decides it does. But things really heat up when talk turns to how the government can help the creative industries, and whether inaction will result in decaying culture. The Music Venue Trust is brought up and commended, but Pritchard’s comment near the end leaves uncertainty hanging in the air. "The UK has traditionally made great pop music,” he says, “And the systems that allowed that to happen are now under attack."

Last panel of the weekend. But we can't tell you anything about it. No social media allowed #TGE17 pic.twitter.com/eJpO19elTH

“Anyone sitting through a panel – or worse, taking part in one – on the Saturday at The Great Escape has something wrong with them.” So says A&R and talent scout Stephen Jones at the end of TGE’s seventh annual Heroes & Villains panel, where industry big shots dish the dirt and swap stories. If he’s right, a packed room full of delegates sure have something wrong with them. There’s tremendous appetite to hear from Debs Wild, Jayne Houghton and Sharnita K Athwal and they don’t disappoint. The air turns blue on several occasions, the hour-long discussion is punctuated with raucous laughter and one story in particular draws a sharp intake of breath followed by all-round dismay at the murkier side of our industry. There’s a wealth of experience among the panellists and they swap stories with the ease only seasoned pros can. The only snag? The panel’s one rule: nothing said can go any further than those in the room. Suffice to say, however, the industry’s a better place for characters like Wild, Houghton and Athwal.