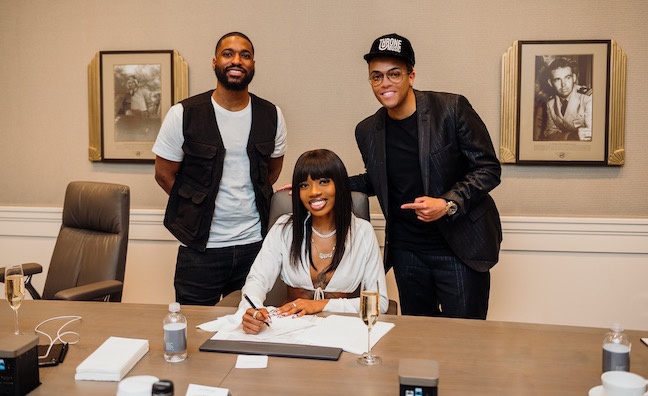 Indie label Throne Music is stepping up its global ambitions after making hip-hop artist Diamond Qing its first US signing.

Seddiki told Music Week he took a leap of faith having spotted an opportunity amidst the crisis of the pandemic.

“We operate mainly in urban music in France, which has allowed us to meet success and conclude several licensing deals and distribution deals with major companies in France,” said Seddiki. “In 2020, during a period where many had to think about stopping their activities, I decided to develop mine – to realise my dream and to open my label in the United States.”

I immediately felt that Diamond could become a world rap star

Seddiki was advised on the move by legendary entertainment lawyer Ron Sweeney and wasted no time in bolstering his roster.

“I was in the US, building my staff and looking for partners – and especially looking for artists – when I came across a song by Diamond Qing on the famous Spotify playlist Feelin Myself,” he said. “I called her manager Jesse ‘JB’ Brown of BAG Management Global and immediately made a JV offer to sign Diamond Qing.

“We signed the deal a few days later at the Chicago Peninsula Hotel, as she was on a promo tour passing through Chicago. I immediately felt that Diamond could become a world rap star; her singles were already doing well in the iTunes and Shazam charts, which is quite rare for new artists, so we decided that Diamond Qing would be our first signing in the United States and that she will be the artist who would put Throne Music on the map.”

JB Brown, manager and CEO of BAG Management Global Inc, said: "I'm excited to be able to work with a global team that enjoys the work of the music business as much as we do here at BAG Management. As you know the music industry is filled with smoke and mirrors. It's truly refreshing to have been able to connect on so many levels with genuine business partners; who care about, and believe in Diamond Qing just as much as we do!"

Diamond Qing added: “This moment feels amazing. In eight months, I was able to accomplish more than I dreamed I could in this time. It’s a blessing, and I'm forever grateful to Sofiane and the entire Throne Music family for helping to make this possible! I’m so excited for what’s to come, just wait til y’all hear this EP!”

A former session drummer and musical director, Seddiki has worked with the likes of Liam Payne, Ellie Goulding and Rita Ora, as well as major French artists such as GIMS and Julien Doré. He is also a founding member of synth pop alt band The Blackmordia, who are signed to Throne Music, who are signed to Throne Music and have gone on to support rock giants including Kiss and Nickelback.

“I had to manage the band and learn about the whole business, so I decided to open my own label because I loved the development process and the creative process,” he added.

Seddiki took his inspiration for Throne Music from “powerhouse” labels such as Motown Records, Def Jam, Interscope and LaFace Records, along with newer power players including 300 Entertainment and Quality Control.

With Throne continuing to go from strength to strength, it surely won’t be long before Seddiki is also inspiring others.