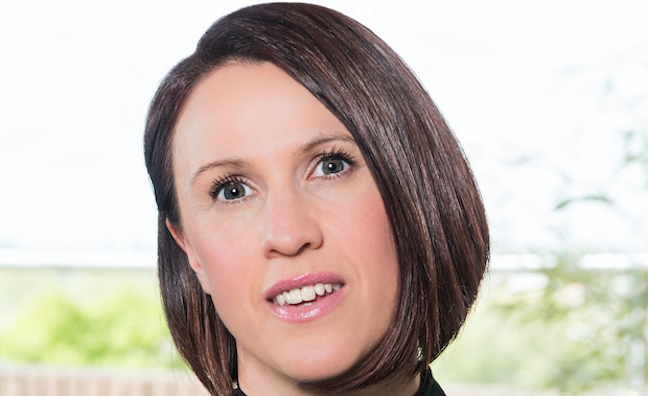 Rebecca Allen has today (Monday, May 8) been promoted from the role of managing director at Decca Records to president, Music Week can exclusively reveal.

Allen is stepping up after 17 years at Universal, in which time she has held posts as Decca’s director of media, general manager and, since November 2014, managing director.

Her promotion comes as Decca enjoys a run of high profile success, scoring Top 10 albums in quick succession with Ball & Boe, Dame Vera Lynn and most recently Imelda May. Ball & Boe’s Together is now double platinum after becoming the UK’s Christmas number one album following its release in November 2016.

Allen has also notched up Gold breakthrough albums with Gregory Porter and The Shires, UK number one albums with Rod Stewart and The Lumineers, and extended chart success with Andrea Bocelli, André Rieu and Aled Jones.

Under her stewardship, Decca Group has also dominated the UK classical and jazz markets with its three labels Decca Records, Decca Classics and the newly formed Mercury KX alongside an expanded roster of affiliate label partners, including Deutsche Grammophon, Verve, Blue Note, Universal Nashville and Concord.

Allen will continue to report jointly to Universal Music UK Chairman and CEO David Joseph and Dickon Stainer, president and CEO of Global Classics and Jazz, in her new role, which is effective immediately.

Commenting on her promotion, Allen says: “Decca is one of the most iconic labels in British music culture, and to be given the opportunity to lead the company forward with a young and ambitious team is a huge privilege. We are known for being distinct and for signing the unexpected and I am enormously proud of the entire team at Decca and all our artists. I would like to thank David and Dickon for their continued support of Decca as the company evolves at an extraordinary time of innovation and opportunity for our industry.”

Joseph added: “Becky is an extraordinary executive. Her passion for artists and every area of repertoire is matched only by the very obvious satisfaction she gets out of running an incredible team. Pretty much any genre goes at Decca, but the one thing that is predictable is that when Becky and her team get behind a project, there would have to be a very good reason for it not to be a success. She is an exceptional leader who is loved by everyone around her, but it would be a mistake to underestimate her steely determination. This is a very well-deserved promotion.”

Stainer said: “Becky’s winning drive and enthusiasm is an inspiration to the young company she has built and to the artists she champions. She is a ground-breaker and a catalyst for change. With her at the helm, anything is possible for Decca – the label which finds audiences others cannot reach.”

You can read Music Week’s exclusive interview with Allen in the new issue of Music Week, out now.