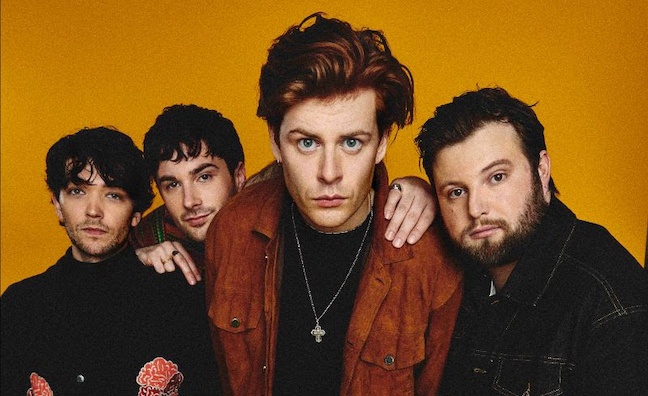 Virgin Music International & Fiction MD Jim Chancellor has spoken about the label’s ambitions to be at the forefront of NFT technology.

Fiction/Virgin are set to release the first ever chart-eligible NFT. A limited edition of The Amazons’ third LP, How Will I Know If Heaven Will Find Me?, allows fans to mint an NFT and access exclusive content.

“There’s obviously been an awful lot of talk about NFTs,” said Chancellor. “We are taking an explanatory approach to it. I won’t mention any names, but we’ve seen a few artists [launching NFTs] and people are rushing in and buying it with no idea what they’re getting involved in. We understand that not everybody gets it, we just want to gradually ease people into it and they will feel like maybe they’re part of a movement.”

The Amazons’ vinyl and digital box set NFT retails at £39.99 and is limited to 300 copies, which will be made available across three drops. Fans will receive a certificate of ownership.

Ahead of the LP’s release on September 2, NFT owners will have direct access via media channels to unseen animated photos, demo clips of upcoming singles and handwritten lyrics, as well as track-by-track analysis from the band.

“There’s a massive weight on our shoulders in terms of education as part of this offering,” said Andy Betts, head of audience and innovation at Virgin Music UK. “We don’t want a fan turning up and saying, ‘I’m the world’s biggest Amazons fan but I’m really scared of this.’ So there’s an educational element to it, which is a trust builder.”

Kings Of Leon released an NFT edition of their No.1 album, When You See Yourself, last year, but the vinyl box edition of The Amazons’ LP is set to be the first UK chart-certified compliant release by the Official Charts Company.

“The reason that this has taken probably about six to eight months to come to fruition is that it’s new ground, so you have to tread carefully,” said Betts. “Essentially, we have to treat [the NFT] almost like a merch item initially. So it has to be within the product itself – you instantly gain the digital token, which acts as a fan pass that unlocks content you can consume during the campaign.”

Virgin teamed up with e-commerce platform Cirkay and Eluvio’s blockchain tech for the NFT.

“It’s just an exciting part of what is going to become quite a regular [feature],” said Chancellor. “So to be at the forefront of it is amazing.”

The Amazons’ manager Jack Wise, director at Gravity, described this campaign as a “fresh start”.

“It unlocks a space for the super fans,” he told Music Week. “That is what sets it apart, it is that access that the fans are going to have to the band, keeping it limited and special, and having that core community that can really get something that no one else is getting.”

Betts added: “Rather than price the fan out of the conversation, put them in a vulnerable position – with this still being new tech to a lot of people – or shoehorn the [NFT] acronym into a campaign, we’ve applied modern technology to a traditional concept and connected it back to the album.”

Wise said it was important for The Amazons to show that rock acts can be tech “pioneers”.

“The thing that got us excited was the fact that we can be the first,” he explained. “We want people to look at The Amazons – a rock act in a climate where perhaps that’s not the most [fashionable] type of music being consumed in its most popular formats – and see a band that can be at the forefront for this next phase of what the music industry is doing.”

Jim Chancellor suggested it was the right moment for The Amazons to introduce a bold new element for their album roll-out.

“They’ve really matured, they’ve learned their craft,” he said. “They’ve gone in a couple of different directions, learned from it and brought it all together on this record.

“And this bit of technology glued into it just feels like the perfect fit, and the perfect time, for a band who are just becoming what they will be for the rest of their career.”

Betts praised the management team at Gravity for bringing the group on board.

“We did try this concept with other artists, but we couldn’t make it happen because the relationship and communication wasn’t honed enough, as it is here,” he said. “It’s great that it’s ended up being with The Amazons because we have been with them since day one.”

Chancellor said that this first chart-eligible NFT will open the door for further campaigns.

“We’re not in the business of putting out average records, we put out records that we believe are extraordinary,” he said. “We don’t put a lot of them out, and I think having something like this attached to [an album] you believe in so much just amplifies all of that.

“We’re now moving into new areas of technology, which we’ve got to do otherwise we’ll be left behind. So we’re very excited to be part of this journey.”