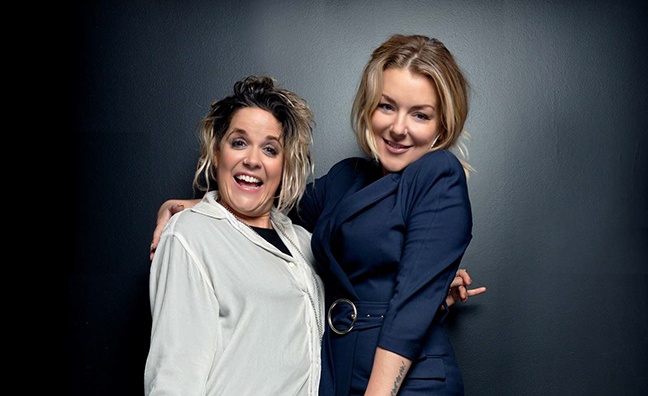 Sheridan Smith has spoken to Music Week about teaming up with "genius" songwriter Amy Wadge for her imminent second LP.

The award-winning actress and West End star teamed up with Wadge, Eg White and producer Jimmy Hogarth to pen A Northern Soul, the follow-up to 2017's gold-selling Sheridan, which comes out on Friday (November 2) via Warner's East West Records.

“I’m very flattered and honoured to be working with amazing people like Amy,” said Smith of the Thinking Out Loud co-writer. “It’s been really cathartic – it’s like therapy – she just got me. It was spooky but amazing and emotional when I heard her stuff. I think she’s a genius."

Smith completed her maiden UK solo tour in the spring, capped by a date at the Royal Albert Hall, and has announced a one-off show at London's The O2 next March.

"When I was on tour, Paul [Samuels, East West A&R] started bringing Amy and Jimmy Hogarth to see the show," she said. "Geniuses that they are, they took things I’d said and put them into songs."

Smith’s 2017 debut album peaked at No.9 last November and has gone on to record to-date sales of 127,047 (OCC). Where Sheridan comprised show tunes and covers, A Northern Soul is a collection of original songs. The album has been previewed by lead single Priceless, and Smith will be the subject of an ITV documentary to be screened on November 4.

“The first one was fun, but it was very much going with the musical theatre vibe of where I’d come from and just doing covers," said Smith, speaking in the current issue of Music Week. “[Songwriting] was like telling a story in three minutes rather than filming for fucking six months, you know what I mean? It’s fascinating, but it’s all new. I’m a complete novice.”

Smith, who won acclaim for her turn as the young Cilla Black in the 2014 TV miniseries, Cilla, signed with East West last summer.

“I’d been asked by another record label when I did Cilla, but it wasn’t the right time and I didn’t really fancy doing it," she said. "But after we did [theatre production] Funny Girl I wanted to take some time out and this time around – certainly since my dad died – it has been perfect timing because I wanted to tentatively get back into the industry.

"I tell you what it was, it was my dad – because when I’d been offered it before, he’d said, ‘Why don’t you just do it? Who says you can’t?’ So when it came along the next time I was like, ‘Why not give it a go?’ So I did and then luckily here I am... Until they drop me!”