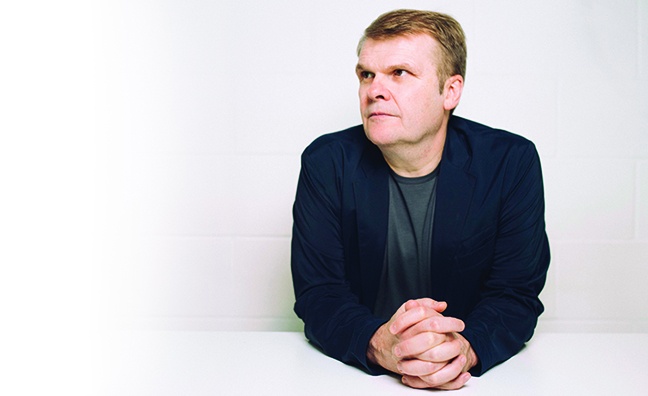 It’s the interview the entire global music industry has been waiting to read. Sony Music Entertainment CEO Rob Stringer has given his first major trade interview since graduating to the top job in April – and, of course, he gave it to Music Week.

Stringer – winner of Music Week’s Strat Award back in 2014 – will pick up this year’s Music Industry Trusts Award in a ceremony at London’s Grosvenor House Hotel on Monday, November 6. And he’s already making waves at the major – with his emphasis on an artist-friendly approach helping revenues to soar 22% in Q2.

In his Music Week cover story, he sets out his vision for the future of Sony and the music industry. So here are five revelations from the interview that the biz really needs to hear…

Stringer went to America before it was fashionable, early enough to see some of the excess that characterised the US biz during the boom years. And he’s determined that aspect won’t return along with the good times for the industry.

“Back then, it was a jackpot economy and the values of that economy were pretty gruesome,” he said. “Since I’ve gone there, I’ve tried not to succumb to that economy and, luckily, the business wasn’t allowing it anyway. Now it’s back, it’s going to be very challenging. You’ve got to monitor all this stuff because it can fall the wrong side of the line again. We’ve got to be really careful not to do that. The money’s back to some degree, the market looks like it’s on the up and what I don’t want to happen is for that to plough into the wrong direction, because I’ve seen it when it’s gone wrong and I’ve got a feeling that, this time, it won’t recover if that happens.”

Stringer is hardly alone in noting that the digital era has completely re-mapped the balance of power in the music industry. But he is one of the few execs to seem completely at ease with that shift.

“When I started, we controlled people,” he said. “We controlled the money because we paid the most. We controlled the environment and distribution. And now that’s gone. We don’t pay the most money. We start the process, which is very important, but we’re not the biggest piece of the fiscal equation for a big artist. So we have to fight in that arena.”

STRINGER ON: THE BRITISH EXEC INVASION

Stringer is part of a British triumvirate now ruling the major labels, with Sir Lucian Grainge as chairman/CEO of Universal Music Group and Max Lousada as CEO, recorded music at Warner Music Group. As he notes, that isn’t just coincidence, instead putting it down to the way the British media fosters an appreciation of different genres that chimes perfectly with the streaming era.

“If you’re brought up on the BBC you’re listening to everything, you’re exposed to different types of music,” he said. “As the digital distribution of Napster and Apple started and now Spotify and Amazon, all of a sudden you’ve got this music that’s everywhere. British people listen to everything from when they first listen to music. The first time I read about how wonderful Stevie Wonder was, or Anita Baker or Bobby Womack, was in the NME. It taught me; you might like Joy Division but you should listen to Bobby too. That didn’t really exist in America.”

Stringer acknowledges the role Spotify and other streaming services have played in the music biz revival. But he wants it to stop there – and any digital service looking to become a music rights-holder is likely to get short shrift.

“We have a complicated relationship with [Spotify] now, because we have to make sure that we’re represented properly and they don’t bypass us,” he said. “Will that happen? I don’t think it will, but there’s a temptation there. If they’re valued at what they’re supposed to be valued at, they could become larger than all the labels put together. That would be odd given that we own the content. It is my job to maintain the balance. I’m conscious of the fact distribution platforms say, ‘We don’t want to be in your business [as labels]’. Good, well, don’t then. You keep saying it but then don’t. If people want to be record labels then that’s a different conversation we need to have.”

Stringer is determined that the biz’s recent attempts to increase diversity across the industry will not stall on his watch.

“It’s going to be one of the most important things I do,” he said. “When you work for a company that’s been around for as long as my company has, you’ve got to shift things because people have been there a long time. And I intend to do that. I need to get that balance right and I’m absolutely aware of it every day and I’m going to fix it. If you look at where America is at the moment, you’ve got to be proactive and be ahead of the curve of some of the things that are happening. It’s in my mind every single day.”

And there’s plenty more where those came from. To read the full interview, including Stringer’s revelations about streaming deals, YouTube and who’s in line for his old job at Columbia, see this week’s print edition of Music Week – or click here. To subscribe and never miss a vital music biz story click here.