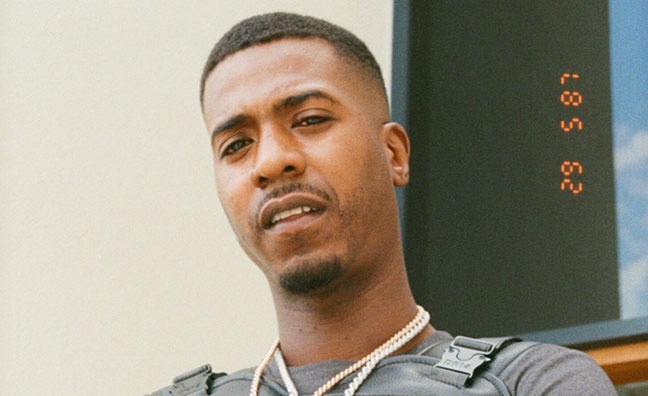 Warner Records UK president Phil Christie has told Music Week that he “couldn’t ask for more” from Nines after the rapper hit No.1 for the first time with Crabs In A Bucket.

Nines topped the albums chart with 13,594 sales last week, and we spoke to Christie alongside senior marketing manager Oksi Odedina about the campaign for the new issue of Music Week.

Christie said that Warner signed Nines in 2018 after A&R manager Patrick O’Neil struck up a conversation with the rapper, from Harlesden in London, at The Great Escape. Previously on XL, Nines reached the Top 5 with One Foot Out in 2017 and Crop Circle in 2018.

Back then, Music Week spoke to then-XL A&R Caroline Simionescu-Marin to get the full story on Nines – who directs his films, videos and visuals and remains elusive between album campaigns – and this week Christie and Odedina fill us in on the rapper’s major label chapter.

“It’s hard to articulate the intensity of what the last couple of years have been like to get to this point,” said Odedina, who oversaw a marketing push that included a showing of Nines’ Crabs In A Bucket film under The Shard, giant blimps flying across London and a giant game of Monopoly.

“People are calling the album a classic already, which is really great,” said Odedina.

Find out more about how it was made in our Q&A with Christie and Odedina below.

What can Warner do for Nines? It’s a significant move from an indie to a major for any artist…

Phil Christie: “He is in the driving seat for his project. He’s designing the way his music looks and feels, he directs his videos, he has a similar directorial approach to record-making as well. So our role was never to change what Nines does, the fanbase he’s built and the standing he has as an artist is all based on authenticity of his work. As is often the case when you a bring an artist who’s so established onto a major label, the worst thing we could do would be to destabilise that relationship he has with his audience and the authenticity he represents. We’ve been here to enhance that as sympathetically as we can.”

What about the A&R process and the features on the record?

PC: “They all come from Nines. It’s not a pop project scenario where we’re saying, ‘Have you thought about this person?’ it’s deep-rooted relationships he has and an instinct for who he’d like to feature on his records. Something else that speaks to his marketing brain is that he’s out finding up and coming actors, comedians and people who have their own trajectory and involving them in his campaign. He has a real marketeer’s perspective in who to involve in his projects, and that isn’t just the artists who feature on the songs. It’s such a challenge as an A&R to enter a project like this where an artist is so established and add value without cramping their style, and Paddy has done that incredibly well, this album feels like an enhancement without for a second not feeling like Nines.”

How did you put the campaign together?

Oksi Odedina: “A large part of his album releases since Crop Circle has been having a movie accompanying the body of work. He’s always released with a ferocious burst of energy for about a month, then he disappears again, because he’s pretty elusive. We came up with a campaign that would really push the month to its limit. The movie is brilliant; so during these times it felt like the best thing to get a who’s who down to watch it at the bottom of The Shard. It was wet and raining out of control, but it was a good night, a lot to celebrate. We have a pretty intense WhatsApp group that’s on 24 hours a day and Tobi [Omoloja] in the A&R team came up with the #nina4number1hashtag campaign, which was our main focus during release week."

Nines is in the driving seat for his project

Was it always an ambition to get to No.1?

OO: “It’s been a goal based on our belief in him, to pull if off means he joins a very elite group of UK rappers who have hit that goal and that’s definitely where we see him. Hopefully the energy that’s gone into this relationship over the past two years reflects that. It’s definitely been on the list of achievements we wanted to tick off.”

How did you keep the fanbase active?

OO: “He’s been doing this for 12 years, a lot of the fanbase have come from his From Church Road To Hollywood release, so they’re probably more aware of Nines’ roll out pattern that a lot of us had been. It’s been a real education process, but working with him closely and trusting that he knows his audience is pretty key to success. The focus was on making amazing videos, which are his brainchild, he directed them, to awaken everybody and make it as provocative as possible, which we did with Clout.”

The No.1 means Nines means he joins a very elite group of UK rappers

What’s it like working with an artist as elusive as Nines?

OO: “That’s a big part of his brand. Ebi Sampson [press officer] did an amazing job securing an interview in The Guardian for launch. And there’s been a lot of silent strategy!”

PC: “What were we doing while he was absent? There was furious activity within the label in terms of creative and getting things ready for release; his absence has been quite crucial to the impact of the return. His own personal story has been so publically known, it’s just created more conversation and more speculation about what’s happening, then he comes straight back in with the intro on the record and lays it all out, that’s part of the artistry of the whole thing.”