'The pig deserves a lot of credit': Sir Richard Branson on Now That's What I Call Music's incredible legacy 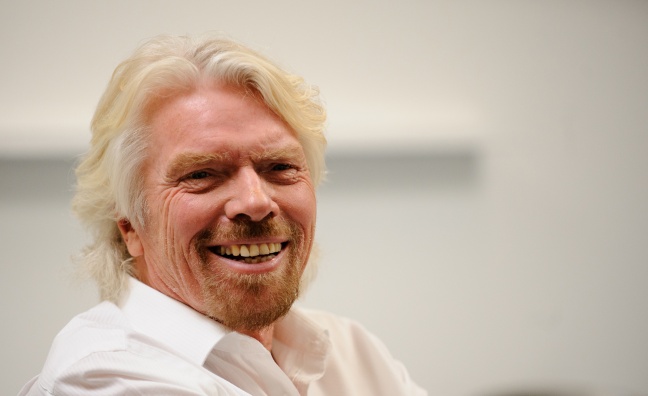 Today’s the day. Now That’s What I Call Music 100 hits stores, cementing its place in music business folklore as the UK’s longest-running and best-loved compilation series.

Somewhat ironically, back in the day, bosses were concerned about numbering each edition, fearing teenagers wouldn’t be interested in the brand once it passed Now 21. Such worries proved unfounded, and Now 100 has attracted widespread publicity, not least in the form of an all-encompassing feature in the current print edition of Music Week.

Music Week was there at the start for Now, back in November 1983, when the concept was dreamed up by Stephen Navin and Jon "Webbo" Webster and the brand was launched by Richard Branson’s Virgin Records in a blaze of curious pig-themed marketing. So Branson – now Sir Richard, founder of the Virgin Group and Music Week’s Strat Award winner in 1991 – sat down with us Music Week to talk through the birth of a compilations phenomenon – and, of course, the historic significance of that pig…

How did Virgin come up with the concept for Now That's What I Call Music?

“At the time Virgin was dominating the charts with our singles, but I was fed up with third party labels like K-Tel ringing us up for our hits and making fortunes out of our hard work. So I went to see EMI and said, ‘Why don’t we both create our own label together which would put out ours and other’s hits?’. The only thing was, we didn’t have a title.

“I’d fallen in love with a beautiful girl called Joan who worked in a shop in Westbourne Grove that sold ephemera. The owner of the shop made it clear that I had to buy something in order to spend time with her in the shop. One day, I saw this wonderful poster for Danish Bacon with the words ‘Now, that’s what I call music’ written on it. We had our name and the rest is history. As for that beautiful girl in the shop? She became my wife…”

Did you think it would be anywhere near as successful/mould-breaking as it went on to be?

“I knew from its initial success that we had created something very special. However, I don’t think anyone would have predicted the 35-year-long success of any brand, especially in the record industry. The music business is fast-changing and ephemeral at the best of times, which makes Now That’s What I Call Music’s success even more extraordinary.”

How important were the compilations to Virgin, financially and creatively, at that time?

“The Virgin label was going through an enormously successful period in the early ‘80s with UB40, The Human League, Culture Club, Phil Collins, Genesis, Simple Minds, OMD, and many more. The success of the Now compilations allowed us to invest more into the business to help maintain Virgin as the premier label it was.”

I saw this wonderful poster for Danish Bacon with the words ‘Now, that’s what I call music’ written on it. We had our name and the rest is history

What is the secret to the series' enduring success?

“I suspect it’s the attractive combination of quality, value, and of course that great brand title: Now That’s What I Call Music, which resonates so well with everyone. And of course Now is always current yet, at the same time incredibly nostalgic, which is an unusual and very positive combination. They represent a host of emotions and memories; as well as some great music it’s those memories that people hold with such affection, whether they bought it on a CD or via streaming. It is the thoughtful curation that ensures every album evokes such memories and becomes a soundtrack of a time in our lives.

How do you think things would have worked out if you hadn’t bought the picture with the pig on it?

“Well, the Hits brand that launched to great initial success so soon after Now didn’t last long, so perhaps that pig, and the 1920s copywriter who came up with the slogan, deserves more credit than we’ll ever know! The pig is held with great affection, many people still remember that poster – not least yours truly!”