'The possibilities are huge': Stacey Tang on her new role as RCA MD 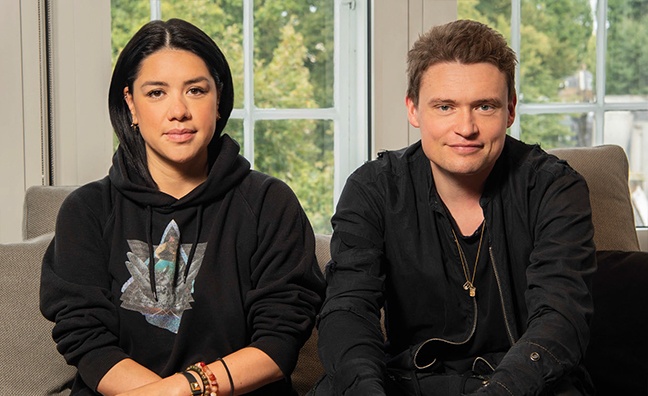 New RCA managing director Stacey Tang has given her first interview in her new role - and it’s with Music Week of course.

The highly-rated exec only has to navigate a short journey between floors for her new gig, as she was previously co-MD at fellow Sony label Columbia.

Music Week revealed her move earlier this month - the latest in a series of developments at RCA - the No.1 label for both Singles Streams (10.4%) and Singles Sales (10.9%) so far this year. Other recent big moves under label president David Dollimore - all exclusively revealed by Music Week - include the launch of new imprint Since ‘93, promotions for Sarah Hall and James Bass and the creation of a string of new roles, including fast-rising exec Parris O’Loughlin-Hoste’s appointment as senior urban artist manager.

In the new issue of Music Week, Dollimore hails Tang as “simply one of the best executives in this business” and said her experience in helping to break artists such as Rag’N’Bone Man and George Ezra would be a big asset for RCA as it looks to extend its singles dominance into the albums world.

So Music Week sat down with Tang - who joined the Music Week Women In Music Roll Of Honour in 2015 - for her first big interview to talk breaking acts, diversity and the importance of an extra flight of stairs…

Congratulations on the new role. Are you excited?

“Yes! I’m a little bit apprehensive but that’s a good spirit to enter into new things with. The possibilities when I look at the roster and the people here are huge. There’s something for everyone and everything to stretch into.”

Why did you decide to make the move?

“I’ve always enjoyed the building aspect of stuff. David is shaping a label that is rooted in its heritage but forward-facing in terms of meaning something culturally to music fans globally. That’s the kind of industry we’re in now. They’ve signed a lot of new domestic acts, they’ve got some new young executives and that kind of energy is contagious. It’s definitely something that I’ve always responded well to. Columbia’s been on a journey like that since I got there. I’m driven by that, I’m goal driven but it’s nice to be building something constructively with a group of people who are all facing the same way. I know how the building works and know everyone in there so it’s not as much of an upheaval as having to find your feet at a new place. That takes 12 months - it takes three months to figure out the new tube journey! I’ll just have to remember to get out at the right floor in the elevators.”

Is there a big difference between Columbia and RCA? Is one more rock and the other more pop?

“That’s probably how it was perceived when I started working at Columbia. But you can’t say Calvin [Harris], George [Ezra], Rag’N’Bone Man, Mark Ronson are rock acts. And RCA has Bring Me The Horizon. So my job is exactly the same: to help people find great music. The theory is the same but the approach is different, because it’s never cookie cutter. My job is to tell stories on behalf of artists in as many ways as possible.”

How excited are you about the RCA roster?

“Very! They’ve had 11 weeks on Radio 1 with Au/Ra & CamelPhat’s Panic Room and that’s still the very beginning of the campaign so that’s exciting. Nao is incredible. The Bring Me The Horizon campaign is really important. I’ve got all of that to work with in addition to Paloma Faith, Pink, Olly Murs, Brockhampton, Miley Cyrus... My inner fangirl music freak is so excited. I’m looking forward to getting under the skin of stuff.”

You’ll be part of an influx of new executives at RCA, is that exciting?

“Regardless of how long they’ve been at RCA, if everybody’s pulling in the same direction and supporting one another, the stuff that you can do together is phenomenal. Everybody becomes attracted to that culture. Culture is a word that’s bandied about a lot in what we do but that’s important: team spirit in terms of what you do. So to me it’s not really so important how long everybody’s been there, it’s the desire to do the work on behalf of the artists. I’m excited about that.”

RCA is the No.1 singles label so that presumably means it has the best handle on streaming...

“Yes, but streams alone can’t get you everywhere. The idea of a team pulling together is you’re telling stories to bring fans in, streaming s helping you do that, radio is helping you do that, and there’s still a place for press in that because press creates chatter on social platforms. Streaming is one element of that because that’s how we measure a lot of our chart sales, but there are a lot of things that go into making streaming happen.”

You helped break a lot of new album artists at Columbia. Are you looking to do the same at RCA?

“Absolutely. It’s really important that we get to tell artists’ stories, whether it’s on the radio or a streaming platform so that [fans] are actually invested in the artist. I’m just looking forward to getting started.”

You’re now one of the most senior female label execs in the UK: is that important to you?

“It’s not important that I’m one of those people. It’s more important because, in terms of helping music fans find music, you have to be able to speak to people in many, many different ways. If the people telling those stories are all from the same place, we’re not doing the best thing for artists. I’m there because of my drive and ambition but, if I tap out and choose to be a yoga teacher or whatever, there shouldn’t be a gaping hole left in the number of female executives who are running things, or the number of any other less well-represented groups. We need there to be more opportunities for people regardless of where they come from or what they look like or who they identify with.”

To read the full story, including an exclusive interview with David Dollimore, see the new issue of Music Week or click here. To subscribe and never miss a vital music biz story, click here.