"Their pursuit of musical excellence is inspirational": Marshall Records sign Press To Meco 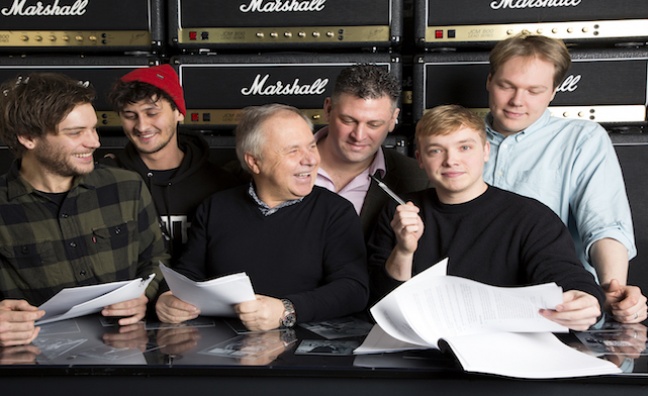 Marshall Records has today (January 12) announced the signing of London based alternative rock trio Press To MECO. The band will also join the roster at Marshall Records Publishing, which was recently formed with BMG Rights Management in London.

Marshall Records launched in July 2017, securing its first signing in the form of Welsh rock outfit The Dirty Youth.

Press To Meco – who have been previously nominated for Independent Album of The Year at the 2016 AIM Awards - will release its second studio album, Here’s To The Fatigue on March 30, 2018. The record was recorded, produced and mixed by Machine (Every Time I Die, Lamb Of God, We Came As Romans).

Speaking about the deal, Marshall Records director Steve Tannett said: “I am delighted to welcome this amazing band on the label. Their pursuit of musical excellence is inspirational to me and I hope to many aspiring young artists around the world.”

In an official statement, the band added: “We’re incredibly proud to announce that we've signed to Marshall Records! Thank you to everyone for being so patient and understanding while we've been quiet, we genuinely have the coolest fans. We’re all super excited to work with such an amazing team and look forward to finally releasing this new album.”

Press To Meco will be touring extensively in support of the album kicking off with dates opening for Arcane Roots in January, as well as a special show as part of Independent Venue Week alongside label mates Reigning Days and King Creature at Nambucca London on Feb 1.