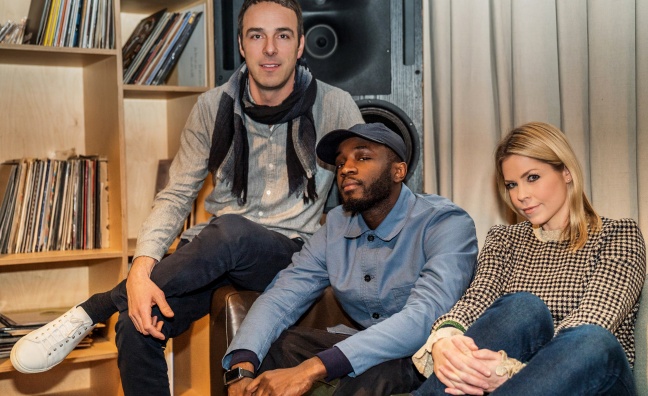 Turner and Boateng will oversee the Atlantic A&R team, joint projects, as well as maintaining their own artist rosters. The duo have carved out stellar reputations through their work with acts such as Jess Glynne.

Turner, who was inducted into the Music Week Women In Music Roll Of Honour in 2015, has also worked with the likes of Clean Bandit, Plan B and Rae Morris as well as developing artists such as Tayà and Dan Caplen.

A&R and broadcaster, Boateng, also known as Twin B, has been instrumental in the recent signing to Atlantic of Stormzy and the #Merky label deal. Boateng also co-A&Red Rita Ora’s new music, as well as helping to develop newcomer Kojo Funds and the breakthrough of WSTRN.

Ed Howard will continue to lead A&R at Asylum Records - home to Ed Sheeran, Rudimental, Anne-Marie - and Paul Samuels will continue with his VP A&R role at Atlantic. Both continue to report to Atlantic Records UK president Ben Cook, with the broader Atlantic A&R team now reporting to Turner and Boateng.

Cook said: “Briony and Alec are two of the most exciting players in A&R, their dynamism as individuals and potency as a pair means they deliver with our brilliant artists time and again. This credibility makes Atlantic UK a landmark destination for the new generation of smart talent. We’re a tight-knit team who share total passion for artist development - something Alec and Briony inherently possess. They encourage the creativity of the broad range of artists who have put their trust in us and empower them to fully realise their ambitions.

"As our world-class roster continues to flourish both artistically, and on the global stage, it’s great to be able to nurture and develop the talent within our ranks too. With such taste and a commitment to the best, I’m always excited to hear the artists Briony and Alec introduce, and I’m delighted for them both on this well-deserved promotion.”

Turner said: “Supporting artists as they make their best music is a real privilege and a passion. At Atlantic UK we operate as one, putting a huge amount of care into everything our artists do. I love working with Alec and I’m very excited about continuing to build on the momentum we’ve collectively gathered over the past few years. There’s a brilliant team at the label and a phenomenal artist roster to work with - I couldn’t be happier about this next chapter.”

Boateng added: “I love music and deeply enjoy the opportunity to work with special artists. Being part of the process of creating brilliant music and art that means something and that deserves to be heard is an amazing thing. Atlantic UK is the best place for that. There’s a family vibe, our artists and team come together to share in each other’s creativity and success - it’s an explosive catalyst. Briony is a complete G, together we’re going to focus on developing the unique culture and artist roster at Atlantic, to ensure it’s the home to the best talent out there. I’m humbled and privileged to be working with and around some geniuses!  Exciting times continue!”

Stormzy said: “In my short four years in this music industry, I can honestly say I’m yet to pick a mind as brilliant and exceptional as Twin’s. The attention to detail, the creative brilliance, the true and absolute passion for music that shines bright in an industry where the business can overshadow the art, the dedication, the commitment and the ear to notice the out of time hi-hat that’s making your song a chart position away from a #1 - all while remaining the most humble, kind, generous and clean-hearted people you’ll ever meet.”

Clean Bandit said: “We’ve worked with Briony for five years and over this period her insight and knowledge has been invaluable to us in achieving higher standards and delivering the best possible music that we can.  Her courage, passion and commitment have always helped drive us on during moments of doubt and brought us through the other side. In addition to helping us create better art, she is a lightning bolt of fun, energy and enthusiasm that never seems dimmed.  An amazing person - caring on every level - and an amazing asset to have on our team. We love you Bri!”