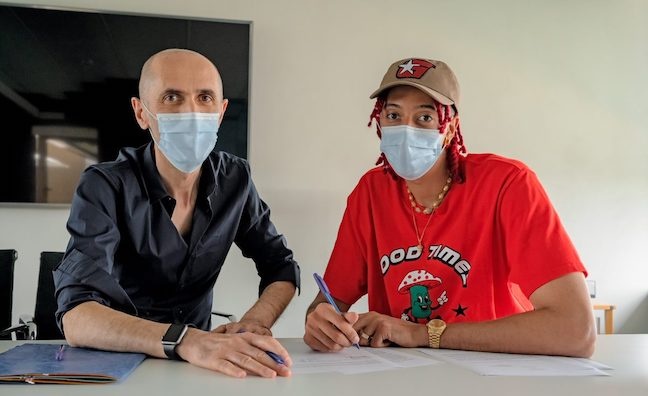 The new deal will see Ghali record three new studio albums with the label and work with Warner Music to continue to develop his career internationally.

The rapper has sold more than 1.6 million records in Italy to date, landing five No.1 singles, and has collaborated with a number of the country’s biggest acts including Salmo and Tha Supreme, as well as featuring on the international remixes of Vossi Bop by Stormzy and Antisocial by Ed Sheeran and Travis Scott.

Ghali, who topped the local charts last year with his second studio album DNA, said: “I have a great relationship with Marco and everyone at Warner Music Italy, so I couldn’t be happier that we’re continuing our partnership.  I’ve been working on some great new music and, with the help of my team, look forward to getting it out to the world and to my fans.”

Ghali is one of Italy's most important cultural figures, he's an incredible artist and the voice of a generation

Marco Alboni, chairman and CEO of Warner Music Italy, added: “Ghali is one of Italy’s most important cultural figures, he’s an incredible artist and the voice of a generation. We’ve enjoyed amazing success together and, by tapping into the global Warner network, we’ve been able to partner him with some of our biggest international stars.  I’m delighted that we’ve renewed our partnership and can look forward to more success in the future.”

Born in Milan to Tunisian parents, Ghali released his debut mixtape, Leader Mixtape in 2013. In 2016, he released the single ‘Ninna nanna’, which set a new streaming record in Italy, achieving the highest number of listeners in the first day, and debuting at No.1 on the Italian Singles Chart with more than 200,000 copies sold in total.

Ghali has performed around Europe at big festivals, such as Lollapalooza in Paris and Wireless in Frankfurt.  With his Tunisian roots, his music is also popular across North Africa and the Middle East.

In May last year, as Milan was starting to come out of its Covid-19 lockdown, Ghali became the face and voice of the its City Of Milan campaign, which invited architects, designers and creatives to rethink public spaces so that they complied with the new safety rules, enabling social distancing without sacrificing conviviality.