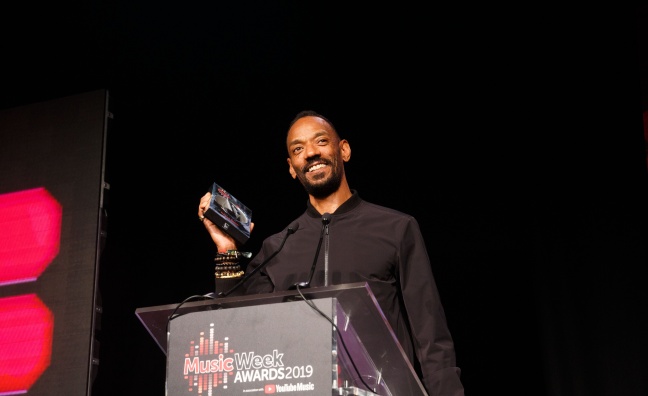 Darcus Beese, president of Island Records US, has been honoured at the Music Week Awards with The Strat – the special career award for an industry icon.

Beese’s record as an industry leader at Island in the UK speaks for itself – he played a pivotal role in the success of U2, Amy Winehouse, Sugababes, Florence + The Machine, Hozier, Jessie J, Mumford & Sons and Dizzee Rascal. So it’s no surprise that many of the acts who valued Beese’s support and industry expertise over three decades have wanted to comment on his achievements.

Here, superstar artists, family and fellow execs from the UK and US pay tribute to the great man…

“Many, many congratulations on getting the Strat Award. I’m proud of your achievements and all of us within UMG are proud of them as well.”
Sir Lucian Grainge, chairman/CEO, Universal Music Group

“Congratulations dear Darcus for receiving this year’s Strat Award, so well deserved. Your legacy continues as one of the great creative executives in our industry. We’re so very proud of you and thrilled that we were able to steal you from across the pond. As Island celebrates its 60th anniversary this year there couldn’t be a more perfect person in place to continue leading the Island culture and heritage.”
Michele Anthony, EVP, Universal Music Group

“Darcus, I’m so proud of you. You’re a natural leader, you’re about integrity, you’re about truth and you’re always about music. Your dad made an incredible mark on culture and society here and you’ve also done that, you’ve helped shape our culture and you’re just about to do it in America.”
David Joseph, chairman/CEO, Universal Music UK

Darcus Beese, what a prince of a man

“Twelve years ago we went on a historic run together that included Amy Winehouse, Florence + The Machine, Jessie J and so many others. I will forever be indebted to Darcus Beese.”
Monte Lipman, founder/CEO, Republic Records

“When I took over I realised I had massive shoes to fill. You’ve been an amazing boss, an incredible mentor and above all a great friend. You truly deserve this award, one love.”
Louis Bloom, president, Island Records UK

“Huge congratulations for being honoured with this special award. I believe you are the first black music executive in the UK to achieve this accolade, this is an achievement of immense significance and also a cause for celebration.”
Barbara Beese, Darcus’ mother

“It’s been a pleasure to be alongside you for so many years at Island with some good successes, spending a lot of a time changing all the members of the Sugababes, reminding people that Taio Cruz is dynamite and helping persuade the world that Amy’s Back To Black was not just a jazz record for old people. Good on you, Mr Beese, congratulations on your award – plenty of success still to come, no doubt.”
Ted Cockle, president, Virgin EMI/former co-president, Island Records UK

“Congratulations, Darcus, you truly deserve this award for everything that you do for all your artists. Island Records has been our spiritual home for a long time now, and as a lifer yourself we truly appreciate everything you’ve done and it’s great working with you.”
Adam Clayton, U2

“I’ve very quickly learned that Darcus not only has one of the biggest hearts, but he’s truly an inspirer and just an incredible mind and person all around. He is extremely deserving of this honour.”
Shawn Mendes, artist

“Congratulations, Darcus, on The Strat award, it is absolutely amazing and incredibly deserved.”
Hozier, artist

Without that faith that you placed in Amy and me, we never would have been able to have the freedom to make that record

“Congrats on the award, it’s so well deserved. I have a lot of fond memories of our friendship together and working relationship. When Amy and I were demoing some songs that would become Black To Black, we played the opening bars of the Rehab demo and six seconds in, you jumped up and were like, ‘Rewind!’ You did that three more times before we got past the first six seconds. That was the first time we’d played that music and to get ‘daddy’s grand approval’ was wonderful. Without that faith that you placed in Amy and me, we never would have been able to have the freedom to make that record.”
Mark Ronson, artist/producer

“You’re an inspiration to us all, Darcus, and a pleasure to work with. Congratulations, very well deserved.”
Winston Marshall, Mumford & Sons

“When I heard you were going to America, even I was upset. I’m proper happy that you’re over there and things are going well for you. From the bottom of my heart, I love you.”
Michael Dapaah (Big Shaq), artist

“You believed in me from the very beginning, and I have always believed in you. I am so proud of everything that you’ve achieved, all the boundaries I’ve seen you break, there’s no one that deserves it more. You’re not just a great businessman, you’re an amazing father, friend and husband.”
Jessie J, artist

“Congratulations on winning such a prestigious prize in the music industry. I feel so proud of you, I’m so happy for you and you’re so loved by everyone that you work with at Universal.”
Annie Lennox, artist