'2018 is going to be an amazing year for guitar music': This Feeling expands partnership with Red Stripe 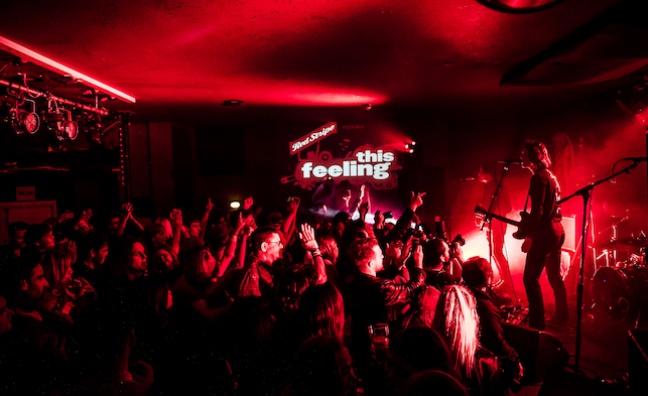 Red Stripe has expanded its brand partnership with indie promoter This Feeling to include 200-plus club shows at over 40 venues, in addition to their collaboration on an online music TV show.

Red Stripe Presents: This Feeling TV launched in 2017 and attracted half a million views of performances by artists including Tom Grennan, Slaves and Rat Boy, alongside interviews with Carl Barât, Holly Willoughby and Abbey Clancy. The show will return for four instalments in 2018, hosted by Radio X presenter Gordon Smart and fellow DJ Elspeth Pierce.

Red Stripe is also building on its brand heritage by sponsoring more than 200 This Feeling club nights in around 40 different venues across the country.

As well as the club nights and TV show, Red Stripe and This Feeling will partner on live streaming a series of concerts in 2018 via Red Stripe’s Facebook page.

Izabela Glodek from Red Stripe said: “The brand has always had a rich association and heritage with indie music, and with Red Stripe Presents: This Feeling TV returning this year, on top of 200 live shows and four live-streamed gigs from Pirate Studios, we expect 2018 to be one of the biggest and most exciting years for the brand to date.”

Founder of This Feeling Mikey Jonns said: “In a climate in which it is nigh on impossible for new bands to break through, or for anyone to give a care about them, with Red Stripe’s help This Feeling are able to revitalise the scene, not just in London, but the entire UK.”

He added: "This Feeling is essentially a coalition of venues, bands, reps, DJs, managers, bloggers, photographers and, of course, mad-for-it music fans brought together by mutual love. And it's growing, the dots are joining, the zone is strong, it's a powerful force. We’re putting on 200+ shows this year and growing and improving This Feeling TV. Everyone's wondering where the next Oasis or Kasabian are coming from – well, I know for a fact they're out there right now and 2018 is going to be an amazing year for guitar music."

The partnership with Red Stripe will also bolster the Earn Your Stripes initiative, which enables students to gain industry experience.

He said: ‘They believe in the power of guitar music, and when the indie scene makes its glorious comeback, you can bet your arse you will have seen it first on This Feeling TV.”

Over the last decade, This Feeling has given early live exposure to acts including Catfish And The Bottlemen and Blossoms, as well as gaining celebrity endorsement from indie icons the Gallagher brothers and Paul Weller.