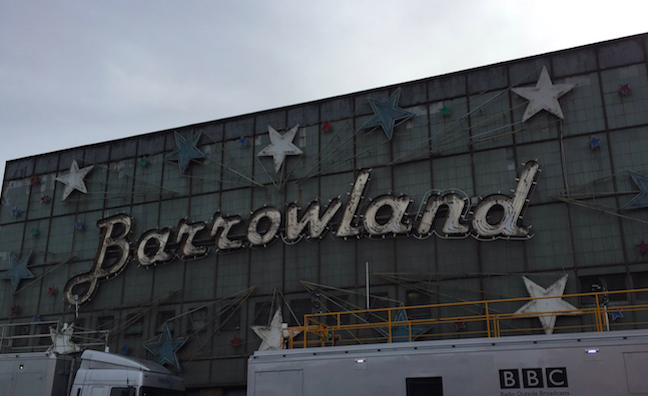 Go past the greasy spoon, walk under the bridge and keep the pub plastered in Celtic FC memorabilia on your left. Look to the right and there it is, Glasgow’s Barrowland Ballroom. It’s mid-afternoon on the first day of BBC 6 Music Festival, so its neon facade isn’t yet illuminated, but the impact remains the same.

Ride, The Jesus And Mary Chain and Depeche Mode are just three of the bands that will pack out this grand old hall over the course of an event that crams busloads of artists into a handful of venues over three days.

There’s a lot to see and hear, from rock to rave, techno to talkshows, so here are the biggest talking points from the fourth edition of the festival that seeks to bring 6 Music to life…

There’s life in the old dogs yet…

Our weekend begins with a rush of noise in an empty Barrowland Ballroom. Soundchecks are often mind-numbingly dull, but Ride’s certainly isn’t. It’s loud and long enough to get lost in, and backs up Andy Bell’s subsequent declaration to Music Week that the band are as eager now as they were in the ‘90s.

Their fringes no longer flop, but Ride still sound great, packing their Friday night set with all the classics, as well as three new songs from upcoming record Weather Diaries. The Jesus And Mary Chain are as impactful, patiently layering sheets of ear-ringing noise that has the crowd getting some decent use of the venue’s sprung dancefloor. The three quid cans of Tennent’s flying out of the fridges behind the bar won’t help the headaches tomorrow, though.

Also out to demonstrate the worth of staying at it as the skin starts to sag are Sparks, Grandaddy and Depeche Mode, whose lithe grooves close out the festival at Barrowland on Sunday night. If 6 Music did a good job in gathering these road-weary pop heroes together, the bands themselves do an even better one of showing it was worth it.

… And even more in the young pups

That said, Saturday night at St Luke’s, a stone’s throw from the Ballroom, shows it’s not all about the oldies. Local indie heroes Sacred Paws are at the hub of new music in Glasgow, and their opening set is pretty much impossible to resist.

Then, after Hayley Bonar’s attitude-heavy folk, come The Lemon Twigs. Two teenage brothers from Long Island, their fluorescent racket sounds shoplifted from the Rock’n’Roll Hall Of Fame, and they look brilliant. Brian and Michael D’Addario swap between drums, guitar and vocals, an impressive display that peaks when Michael, wearing a catsuit, contorts his springy limbs into a series of crotch-threatening high kicks.

Led by frontman Will Toledo, headliners Car Seat Headrest are noisier still, another shining example of how to do something individual while obviously borrowing from rock history. If this was the ‘90s Weezer and Pavement would’ve been worried about this lot.

Grouping these newer acts together is another neat trick, and you get the impression not many in the rammed crowd are thinking about Depeche Mode et al.

As well as Thundercat, Loyle Carner and Bonobo at Barrowland, life beyond the bands can be found at SWG3, the cavernous warehouse that turns 6 Music Festival into a rave on Saturday night. Hercules & Love Affair’s Andy Butler, Nightwave, Femme Fresh and K4CIE are the picks of the Poetry and Warehouse rooms, but the main event takes place in the vast TV room.

Headlining are local boys Optimo, once Sunday night residents not too far from here at the Sub Club on Jamaica Street. Opening acts Lindstrøm and Jungle, who DJ, set an imposing tone, sound swallowing a crowd that’s growing larger by the second. Dusky’s harder techno gives everyone a good battering, before a double-header that rivals Ride into the Mary Chain on Friday. Simian Mobile Disco precede Optimo, and those two in a big, dark room on a Saturday night in Glasgow is a simple, emphatically effective combination.

Love is in the airwaves

How to get a 6 Music Festival crowd excited? Namedrop the station that organised it. Sleaford Mods frontman Jason Williamson is the first to do it, eliciting delighted, beery cheers at Barrowland early on Friday night. When Mark Radcliffe and Temples do the same at Tramway on Saturday afternoon, the love between station and listeners is abundantly clear.

It permeates Music Week’s every conversation too, from station boss Paul Rodgers, to Ride’s Andy Bell, everyone seems to be eulogising the bond between those that make 6 Music happen and those that listen to it. If anything, the festival feels like an opportunity to physically manifest that feeling.

They built this city on rock’n’roll

Of course, this event also means Glasgow itself can shine. Not all of its rich array of venues is being used, but those that are really show its weight as a great music city.

The air in the gaudy Barrowland feels musty with rock and pop history, while the O2 Academy’s ornate stylings suit transportive sets from both Belle & Sebastian – who host a polite but brilliant stage invasion – and Future Islands. St Luke’s, built in 1836, shows precisely how to mix a modern venue spec with an historic building. There are old tram trails running through the spacious, airy Tramway, and each of its four separate rooms complements what’s happening inside, whether a set from Father John Misty in the main hall, or Mark Radcliffe picking over John Lydon’s career in conversation in room four.

By the end of a weekend zipping between these places, you’re left with the indelible impression not only of Glasgow’s musical past, but also its present and future, too.

There’s something in the atmosphere

As a young event that moves to a different city each year, 6 Music Festival has wasted no time in creating a distinct look and feel. From the foliage hanging artfully in every venue, to the buzz emanating from the crowds throughout, the atmosphere feels unavoidable. The chat in bars and taxis – a lengthy debate with one driver about the merits of The Jesus And Mary Chain’s predilection for feedback sticks in the memory – makes it seem as if the festival means something to the city too. And that’s no mean feat.

For a full report on 6 Music Festival 2017, see next week's edition of Music Week.