'A bittersweet triumph': Music Week reflects on We Are Manchester 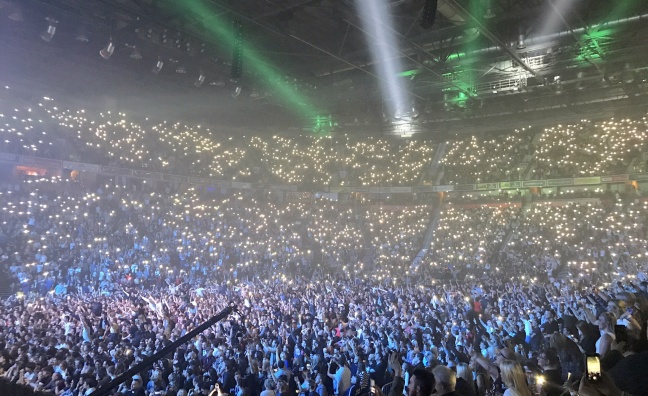 Manchester Arena was a scene of high emotion, defiance and unity on Saturday as the venue got back into business for We Are Manchester, its first show since the May 22 terror attack.

The 14,000-capacity charity concert was organised by the arena's operator SMG Europe and sold out within minutes of going on sale. Held in aid of the Manchester Memorial Fund, it was headlined by Noel Gallagher's High Flying Birds, backed by a stellar supporting cast including Courteeners, Blossoms, Bugzy Malone, Nadine Coyle, Rick Astley and Pixie Lott.

Here are Music Week's highlights from - and reflections on - an occasion that will live long in the memory...

Hail to the chief

After Don't Look Back In Anger was adopted as an "anthem of defiance" in the wake of the Manchester arocity, there was only one contender to headline this show. Humorously introduced as "Mr Manchester himself - all the way from London..." by comedy legend Peter Kay - possibly one of the few people in the UK wittier than him - Noel Gallagher did his hometown proud.

Hailing Manchester as "the greatest city in the world", Gallagher proclaimed: "Every time we sing, we win," ahead of a sublime acoustic version of the (What's The Story?) Morning Glory classic (which coincidentally entered the world in 1995, the same year the arena opened). As a sidenote, not only did Gallagher's nine-song set include five Oasis songs, his backing band featured two former Oasis (and latterly Beady Eye) members - guitarist Gem Archer and drummer Chris Sharrock. It seems Liam has lost custody of the kids...

Comparisons with June's incredible One Love Manchester benefit gig were perhaps inevitable, but We Are Manchester packed a different kind of emotional punch. Where the former helped soothe a city still shaken to its core, the latter provided some form of closure while paying its respects to those who lost their lives.

"There's been a lot of joy in this room over the years, including the night of May 22, right up until the terrorist attack," said Kay, who once worked as a steward at the arena. "These last four months have been incredibly painful. But that's why you're here - because we can't let terrorists win."

Merely big in the rest of the UK, Courteeners are positively huge in their hometown - and frontman Liam Fray acknowledged they're unaccustomed to playing second fiddle. "There are probably only two [acts] that we play under and that's The Stone Roses and Noel Gallagher," he said. The band incorporated Tomorrow by fellow Manchester favourites James into set closer What Took You So Long? but it was penultimate track Not Nineteen Forever - one of the indie anthems of the past decade - that got the arena literally jumping for joy.

Manchester's (OK, Stockport's) next big thing showed they have the live credentials to back up their gold-selling debut album, delivering an accomplished set that belied their relative inxperience at the highest level. A guest spot from James Skelly on The Coral's Dreaming Of You was also a welcome (if random) surprise.

Emerging grime artist Bugzy Malone and established pop stars Pixie Lott and ex-Girls Aloud member Nadine Coyle provided a change of pace from the rock-oriented headliners, but it was Manchester's own Rick Astley who left jaws agape with a (decent!) cover of Foo Fighters' Everlong. To the relief of many, Astley returned to safer ground with his last song, the peerless Never Gonna Give You Up.

Peter Kay: "The victims will never be forgotten. But we've got to move forward with love and not hate & that's how we win." #WeAreManchester pic.twitter.com/9vrUPdClnM

We Are Manchester was a bittersweet triumph, a night that ran seamlessly, raised funds for an excellent cause and re-asserted Manchester Arena as a much-loved staple of the touring circuit - a place where countless gig-goers have experienced some of the best nights of their lives. Yet on a night packed full of homegrown musical brilliance, it was a local comedian whose words resonated most powerfully. "The victims will never, ever be forgotten," vowed Bolton-born Kay. "But we've got to move forward with love and not hate - and that's how we win."