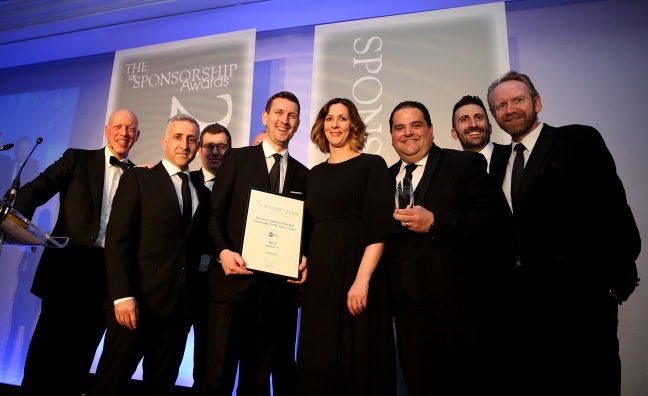 EVP Paul Samuels picked up an individual award for Entertainment Sponsorship Champion. He negotiated O2's sponsorship of The O2 while working for Telefonica before joining AEG.

The awards were presented to O2 at a gala dinner held at the London Marriott Hotel Grosvenor Square.

Paul Samuels, EVP, AEG global partnerships, said: “This trio of wins is testament to the strength of AEG’s Global Partnerships team. As part of the team who negotiated the original deal in 2005 to bring The O2 to life, this is one of the biggest highlights in my career so far.

"Over the past 12 years, AEG has worked tirelessly in partnership with O2 to create the world’s most popular music and entertainment destination. Barclaycard presents British Summer Time Hyde Park is now a staple in the summer festival calendar and AEG Presents continue to bring the biggest names to the capital year after year. I am of course delighted to be named as a Sponsorship Champion, but that doesn’t happen without the backing and support of an immensely talented team that I am proud and honoured to work with.”

The partnership between O2 and AEG dates back to 2005 when the companies agreed a landmark deal to turn the Millennium Dome into The O2.

Gareth Griffiths, head of sponsorship at O2, said: “We are delighted to receive this recognition from the sponsorship industry who shortlisted, and the public who voted, for The O2. Since launching in 2007 our brilliant partnership with AEG has created millions of unforgettable live experiences under our world-famous roof, with Priority putting O2 customers at the heart of all we do."