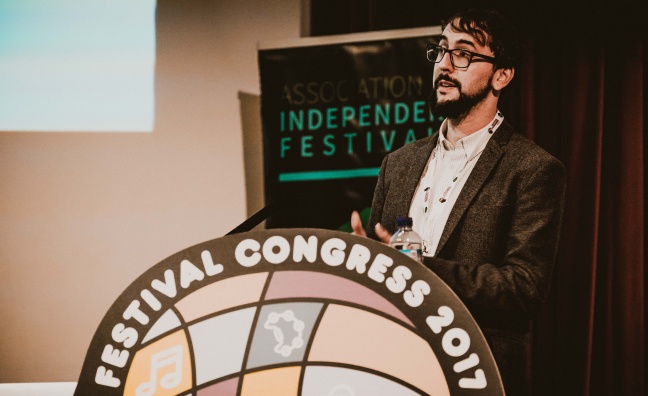 Association Of Independent Festivals (AIF) chief Paul Reed has looked back on the trade body's first 10 years ahead of next week's Festival Congress.

The fifth annual Congress, which is expected to attract more than 400 delegates, will be held in Sheffield from November 6-7, featuring a two-day conference and the Independent Festival Awards.

“I don’t think the music industry looks outside of itself enough,” said Reed, speaking in the current issue of Music Week. “There are quite a lot of conferences, so you have to do what you can to stand out.”

Reed (pictured) was also critical of the BBC’s free music events, such as The Biggest Weekend., arguing that its resources would be better utilised on existing festivals.

“The BBC are a fantastic organisation in many ways, but they are essentially distorting and ‘skewing’ the festival market by producing free or low-ticket price events,” said Reed. “The BBC should arguably not be using funds from licence payers for what amounts to interfering in the commercial market in order to promote its own platforms and brands. It would surely be more cost effective for them to broadcast more existing events as opposed to expanding their own portfolio, given the variety of festivals and events in the UK.”

Rhys Hughes, BBC head of live music & events, popular music, told Music Week earlier this year that the corporation had been careful to avoid any impact on the festival market.

Elsewhere, Reed addressed the situation with Camp Bestival, run by AIF founder Rob Da Bank. The company behind the event went into administration last month, but the festival will go ahead in 2019 as part of a deal with promoting giants Live Nation-Gaiety and SJM Concerts. AIF has previously called for an investigation into Live Nation's festival dominance.

"While many will have hoped for a solution to Camp Bestival’s situation that could have seen the company remain independent and prevent further market consolidation, we wish everyone there all the best for the future," said Reed.

"It is important to say that the team there were facing a unique set of circumstances and challenges and that overall, the independent festival sector remains healthy and buoyant. The AIF membership in particular is full of festivals that are providing exciting experiences for music fans each year and seeing their businesses thrive and grow as a result."

Reed has been with AIF for half of its existence, having joined as general manager in 2013. He was upped to CEO following the organisation's split with AIM in the spring, and is proud of what it has accomplished in its first decade.

“We’ve had some real wins," he said. "Whether it’s been around legal highs, safe spaces in festivals or, this year, eliminating single use plastics, the agenda has moved on every year. And then there are all the nuts and bolts challenges around PRS tariffs and business rates, so the landscape changes on an annual basis.”

Subscribers can click here to read the full interview with Reed.