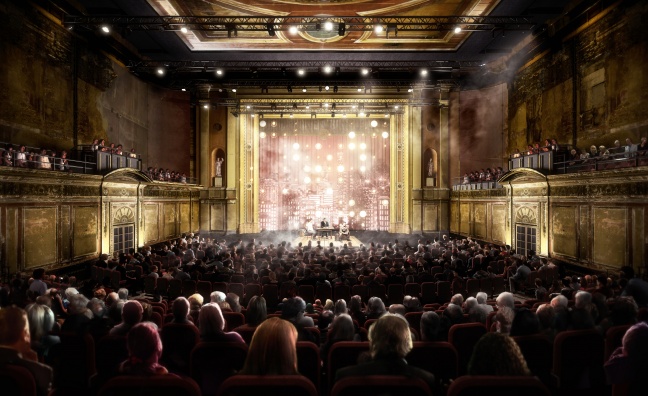 It will then close while the project completed before officially re-opening on December 1.

Louise Stewart, CEO of APPCT, said: “Reaching this point is a testament to the dedication of the team at the Palace, our partners and our funders. Without them this work would not have been possible. The re-opening of the Theatre and East Court is a major step forward in our mission to bring areas of the Park and Palace back to life and strengthen our audiences’ connection to our unrivalled history. We look forward to welcoming new audiences and supporters and sharing the Palace’s hugely exciting journey.”

The December opening weekend will see a headline performance from a major act TBA on December 1, as well as a Gala, compered by comedian Adam Hills, on December 2. The event will feature a variety bill of music, comedy, circus and surprises with special guests to be announced.

December will also see performances from Dylan Moran, Gareth Malone, an evening of jazz presented by Ronnie Scott’s and acclaimed artists Gilbert & George in conversation. The BBC’s long-running Friday Night Is Music Night, hosted by Ken Bruce, will also broadcast from the Theatre. Horrible Histories - Horrible Christmas, presented by Birmingham Stage Company and Derby Theatre, will run from December 4-30, the first time the production will have been seen in London.

Opened in 1875 with a string of productions, the Theatre went on to be used as a chapel, cinema and later a BBC prop store and workshop. It has not been used for regular performances for more than 80 years.

In addition to the support from the HLF and Haringey Council, the renovation project has also attracted support from a number of charitable trusts and foundations, including American Express Foundation, J Paul Getty Jnr Charitable Trust, Garfield Weston Foundation and Heritage of London Trust.

Members of the public have also been invited to support the restoration through a public fundraising campaign, enabling them to name a seat in the Theatre.