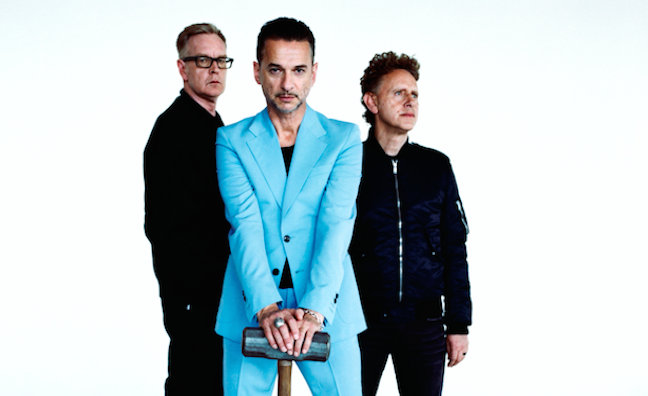 Electro rock pioneers Depeche Mode have announced details of a new album and tour for 2017, which will see the band perform their first UK stadium show in over 20 years.

The band made the announcement at a global press conference in Milan, Italy, where they revealed that the new album, entitled Spirit, will be released in early Spring 2017. Though the album is not yet finished, the band did offer media and fans a brief snippet of their new music, which frontman Dave Gahan described as sound “uplifting and thought-provoking”.

“We are incredibly proud of Spirit’s sound and energy,” he added. “And we’re excited to get back on tour to share it with our fans around the world.”

The album is produced by James Ford, who has worked with the likes of Arctic Monkeys, Florence and the Machine, Mumford & Sons, Little Boots and more. He is also a founding member of Simian Mobile Disco.

In addition to the album, the group revealed details of the first leg of their 2017 European tour. Though more dates are set to be added, the tour currently features one UK concert – a night at the London Stadium on June 3. The show will mark their first UK stadium gig since 1993, when they headlined at Crystal Palace National Sports Centre. The tour is being dubbed as the Global Spirit Tour.

The tour will play to over 1.5 million people across 32 cities in 21 countries, kicking off on May 5 at Stockholm’s Friends Arena and concluding on July 23 in Cluj-Napoca, Romania.

While the band avoided answering any questions about the new album, they did address the issue of diminishing album sales and the negative impact it is having upon up and coming artists.

When asked what concerns the band most about today’s music industry, Andy ‘Fletch’ Fletcher said: “I find it frustrating that smaller bands are finding it more difficult to get to the top, with very low record sales and radio stations not really playing much new stuff. That’s very frustrating and it makes us feel very lucky that when we were around it was totally different.”

Tickets for the tour go on sale on Friday, October 14. See below for tour dates in full.