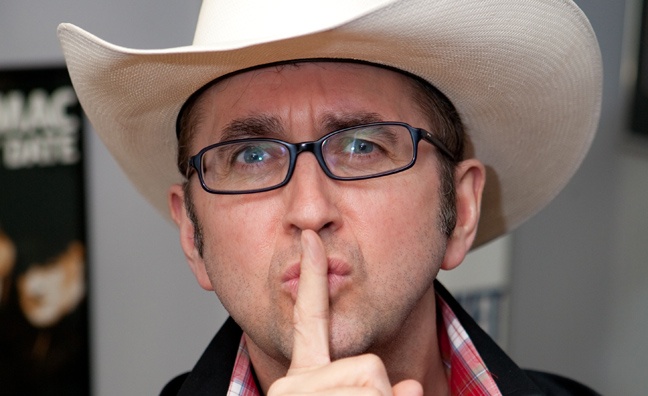 In the latest issue of Music Week, Live Nation’s president of UK touring and Download Festival promoter, Andy Copping takes on the Big Interview. Ahead of Download taking over Donington Park today (June 9) for an extended weekend of rock and metal – including headline sets from System Of A Down, Aerosmith and Biffy Clyro – Music Week spoke to Copping about his original vision for the festival, which started in 2003 on the hallowed site of the original Monsters Of Rock festival, and who he thinks could be headlining the festival in years to come…

When you first created Download, what identity did you want it to have within the wider world of music?
”I wanted it to be the modern day Monsters Of Rock. I was at the very first one in 1980 and I went to a number of them over the years. But I knew why Monsters Of Rock had died: it hadn’t moved with the times. That’s not blaming anybody, it’s just how it had become.It launched in 1980, by the time the grunge alternative scene had really bitten hard, none of those bands were ever going to play at Monsters Of Rock… you were never going to see Chili Peppers, Faith No More, Nirvana and Pearl Jam.It was the antithesis [of what they stood for] – even the name of it. They could have quite easily fitted in there. They’d had 10 years of Mötley Crüe, Bon Jovi, Def Leppard, Guns N’ Roses, Aerosmith – there’s nothing wrong with those bands at all – but it hadn’t moved with the times and allowed those bands in comfortably to help the overall fabric of the festival change.So, when we first launched Download, we said, We’re not booking any classic rock bands. Okay, you can call Iron Maiden classic rock, but they’re a metal band and they transcend that. It was a conscious decision that we didn’t fall into the Monsters Of Rock trap.”

But hasn’t Download had a pronounced classic rock element for years?
Without a shadow of a doubt. Download has evolved from when it first started. From two days, two stages to what it is now. I remember the year when we clicked, when we felt we’d properly found a niche. We tried in 2005 to go too much the indie root – it was Feeder and The Others. I remember at the time not feeling comfortable about it, and it was the first time we went to three days. It was a conscious decision to make one of the days a bit more indie and it didn’t really connect. There was a proper sea change in 2009 when Def Leppard and Whitesnake were booked with Faith No More and Slipknot. I remember seeing somebody in a Slipknot shirt watching ZZ Top. I thought, This is working! They’re not necessarily a fan of that band, but they’re watching and enjoying it."

Precisely how sick are you of being asked the age old question, Who are the future festival headliners?
I think every festival booker has the same issue. We have to bring headliners through as an industry if the bands have got it. I get asked, Who are the headliners of the future?I don’t necessarily know, but I know there are a few bands out there that potentially could be. Bring Me The Horizon, Fall Out Boy, A Day To Remember, Five Finger Death Punch, Paramore, Alter Bridge – I’m plucking them with ease. The opportunity is there.We’ve got to get behind them. Nobody batted an eyelid seeing Metallica rise up through the ranks. In the past we’ve had Slipknot, Avenged Sevenfold, Biffy Clyro and people said, These bands aren’t deserving headliners? Of course they are. When Slipknot headlined there was literally no way back, same with Avenged. Of course they’re valid headliners."