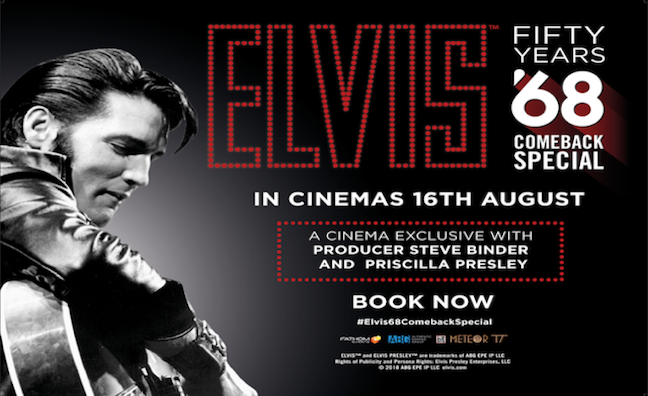 Elvis Presley’s legendary ’68 Comeback Special, directed and produced by Steve Binder, will be screened in over 250 cinemas across the UK & Ireland on August 16, in celebration of its 50th anniversary.

Originally airing on December 3, 1968, the concert was Presley’s first live television performance in seven years, which captured him playing with a full band in front of an intimate audience of fans. The soundtrack album shot to the Top 10 following the television special, catapulting Presley back to the top of the singles charts months later with In the Ghetto and, later in 1969, his first No.1 hit in seven years with Suspicious Minds.

Screenings will include the 90-minute concert, as well as a behind-the-scenes look at the making of the special, featuring a walkthrough of the NBC soundstage with insights from Binder and others influenced by Presley and his music. This new content is produced by Spencer Proffer, CEO of Meteor 17, and ABG’s Marc Rosen, SVP of Entertainment.

Joe Evea, CEO of CinEvents, said: “We are thrilled to partner with Fathom & ABG to bring such an iconic concert experience to cinemas across Europe in August.”

Marc Rosen, SVP of entertainment at ABG, said: “We are always looking to uncover fresh and exciting ways to share our content with fans through unique experiences. Our new partnership with Fathom Events has provided us with an opportunity to take the cinematic experience to the next level, and we look forward to watching the excitement unfold.”