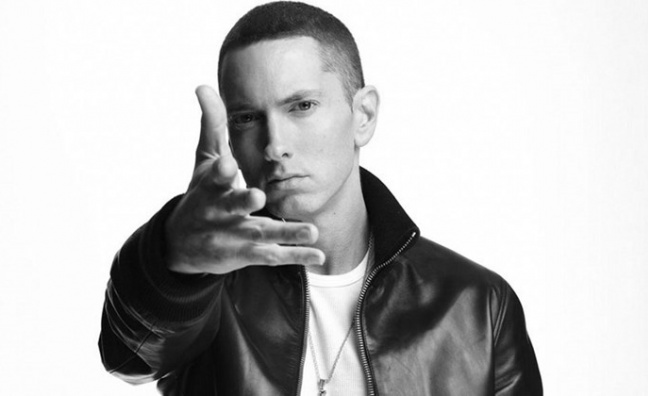 Headlining Reading & Leeds has become a "tradition" for Eminem, according to his agent Steve Strange, as the rapper made his third headlining appearance at the festival this weekend.

The US icon - aka Marshall Mathers - performed at Reading on Saturday and Leeds on Sunday, having previously topped the bill at the twin events in 2001 and 2013. He also played Glasgow Summer Sessions on Thursday (August 24) in Bellahouston Park.

"He’s a legend and one good thing about Eminem is that he’s so continuously relevant," Strange told Music Week. "From the start of the career right up to date, the guy is one of the hippest and coolest performers that there is in the business and I don’t think that can be denied.

"Reading & Leeds has been a tradition for Marshall. He likes the event and I think the audience is very much his demographic."

"This made sense for management whenever we brought up the discussion," he said. "The Reading & Leeds organisers approached me about having him in and doing the festival this summer and, to be honest, it’s a nice wave of visibility for him to come in and do three shows very quickly and very simply where he’s able to."

His three UK dates are expected to be Eminem's only concerts of 2017 and no discussions have taken place regarding potential dates for 2018 and beyond.

Mathers took a hiatus from touring from 2005 to 2009. "We came back in [2010] to do three events: a show in Switzerland called Openair Frauenfeld, T in the Park in Scotland and Oxegen in Dublin. That was his re-entry back into the live arena and since that we’ve done sporadic touring, where we’ve taken in a mixture of festivals and headlines.

"Every single one of his headline shows have all sold out, by the way, with the exception of none. I’ve had a very consistent career of sell-outs for this guy."

Strange said the rapper, who last performed in the UK in 2014 - playing two nights at Wembley Stadium - enjoys touring "in the right environment".

"He’s a solo artist so there’s a lot of pressure on him as one performer," he said. "Even though there’s a lot of other people on stage, it’s his show. This is 100% him out there, doing his thing and it’s a big show. There are a lot of great visuals in there and he puts on an amazing show, that takes a lot of work. But yes, I think he does enjoy it.

"He likes being in the studio as well, but he’s always seemed to enjoy the shows that I’ve seen him in and I’ve seen him on both sides of the Atlantic."

"When you look at some of the major albums that he’s made over the years, he’s had a consistency of greatness the whole way through," added Strange, who also books the likes of Coldplay, Queens Of The Stone Age, Eagles Of Death Metal and Snow Patrol.