End Of The Road festival partners with BBC Radio 3 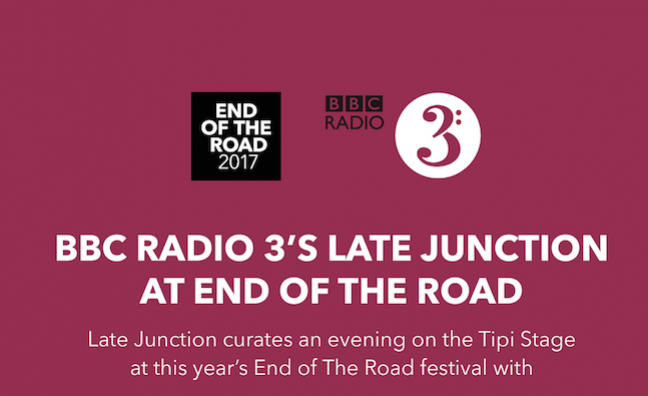 BBC Radio 3’s Late Junction has announced details of a new partnership with End Of The Road festival, which takes place from August 31-September 3.

The station is curating Friday evening’s Tipi Stage, with four artists set to perform on the Tipi Stage as part of Friday night’s line-up, followed by a DJ set from Late Junction’s Nick Luscombe. Other activity will include live Q&As with presenter Verity Sharp and artists from End Of The Road’s line-up, which includes Mac DeMarco, The Jesus & Mary Chain and Father John Misty.

South London singer Klein, Greek/Australian duo Xylouris White and Tuareg singer and guitarist Mdou Moctar will form part of the Tipi Stage line-up. Recordings of all performances will be broadcast on BBC Radio 3’s Late Junction from September 12-14 from 11pm.

Alan Davey, controller, BBC Radio 3 said: “Late Junction is a special place where adventurous listeners who are open to experiment can come across the surprising and unexpected. At BBC Radio 3 we want to connect our audiences with remarkable music and so a partnership with End Of The Road Festival is such a lovely fit for us - I know that listeners who can’t attend the festival are going to love having the best seat in the house through our broadcasts.”

Simon Taffe, founder and curator of End Of The Road Festival commented: “End Of The Road is a uniquely independent festival run by fanatical music lovers and is celebrated for its exceptional line up. We are big fans of Radio 3’s Late Junction, with its never predictable presentations of experimental music and we’re thrilled to partner with them this year. It’s so great that Radio 3's audience will be able to get a taste of the festival from the comfort of their sofas, and that our audience will get to experience some new esoteric artists live on stage.”

Now in its 12th year, End Of The Road takes place at Larmer Tree Gardens, Wiltshire. The day splits for the event were announced this week and can be viewed here.