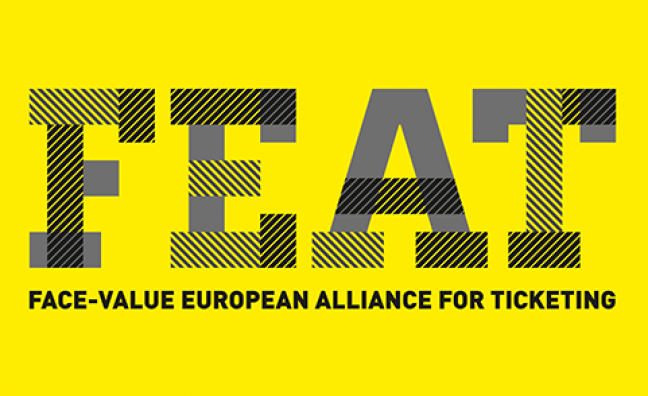 A cross-section of top international promoters have teamed up to form the Face-value European Alliance for Ticketing (FEAT) to promote face-value ticket resale across the continent.

Launching at this week's Eurosonic Noorderslag conference in Groningen, the Netherlands, the organisation aims to build on the work of existing initiatives such as FanFair Alliance to encourage better resale practices via a Europe-wide approach.

The list is completed by Olivier Darbois, director of Corida in France, Ben Giezenaar and Pascal Van De Velde of Netherlands and Belgium-based Greenhouse Talent, and Philippe Cornu, founder of Wildpony, and Vincent Sager of Opus One, both based in Switzerland.

Doctor Music Festival promoter Sala, who has worked with acts such as Adele, Rolling Stones and Bruce Springsteen, said: “Governments need to understand speculative ticket resale is an abusive and unethical practice that harms people, and they need to approve laws that make it virtually impossible. We need legal tools that facilitate the immediate preventive close down of websites that put tickets on sale without having been authorised by the organiser of the event.”

Sabottka, who promotes the likes of Red Hot Chili Peppers, Pearl Jam, Lykke Li, Björk, Rammstein and Florence + the Machine, added: “We need to get this right as otherwise fans and artists alike will be robbed by thieves; if we all pull this together and get EU legislation to follow our lead, we can ultimately make it work.”

The Alliance will be run by Name PR founder Sam Shemtob,who has been active in the UK’s All Party Parliamentary Group (APPG) on Ticket Abuse for several years, and colleagues Katie O’Leary and Dominic Athanassiou.

Shemtob said: “The growth and effectiveness of grassroots movements against industrial ticket touting in the UK, France, Germany, Spain, Italy, Switzerland in recent years has been invigorating. The time has come for these these movements to connect, collaborate and speak as one at a European level, where we know MEPs are listening.”

FEAT is already actively involved in EU parliamentary discussions on secondary ticketing and has also been facilitating the formation of a legal group to coordinate activities on ticketing regulation and with search engines.

FanFair Alliance campaign manager Adam Webb said: "The FanFair campaign has shown that legislation and regulation can have a disruptive impact on exploitative secondary ticketing and help foster a more consumer-friendly approach to ticket resale.

"There is still work to do in the UK and challenges ahead, but because of collective action the situation has improved markedly since 2016. Our focus will remain on these shores, but we are happy to share our experiences and support the activities of FEAT in building wider European networks and improving EU legislation."

Per Kviman, chair and Virpi Imonnen, vice-chair of the European Music Managers Alliance (EMMA), added: “In the last decade we’ve seen the live industry flourish, with revenues from concerts and festivals becoming the primary source of income for artists and musicians. But this has come at a price, and, spurred on by the rise of the internet, the secondary ticketing market has thrived, draining money away from fans, artists and the industry.

"It is great that FEAT has formed to enable us to work together on a European level to share experiences and knowledge and help better the market."

The news comes on the day of the Competition And Markets Authority (CMA) deadline for UK secondary ticketing sites to comply with its court order to improve information about tickets listed for resale.