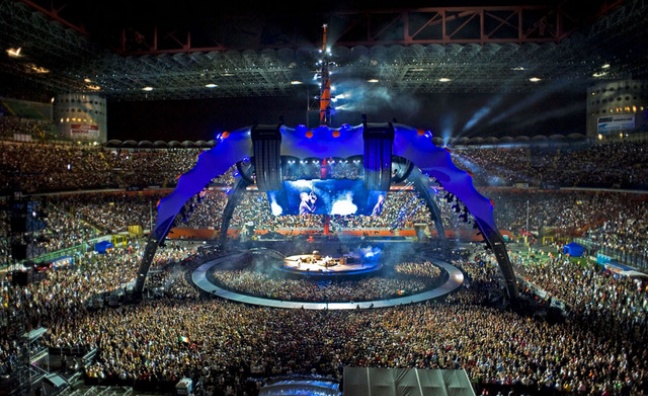 McGuinness, who was grilled by raconteur Ed Bicknell of Damage Management for ILMC’s traditional Breakfast Meeting, recalled U2’s ground-breaking 360° tour of 2009-11, which remains the highest-grossing tour of all time ($736.42 million).

“The name of that tour was my little joke in a way because the record companies at that time were pursuing these immoral [360°] deals where having failed to exploit digital distribution, the only thing they could think of to make more money was to take it off the artists who were going out doing gigs. It was shameful, I thought,” said McGuinness.

“So when we put together that production – which was playing in the round in stadiums – it was extraordinarily expensive to do. We were $30-40 million into pre-production before the tour started. That tour grossed three quarters of a billion – 110 shows - the net of course was rather less.”

Famous for its four-legged structure dubbed The Claw, 360° was attended by 7.2m people across the globe. Elaborating on the astonishing scale of the presentation, McGuinness revealed that days off effectively cost $300,000. “There were 200 trucks. There were 400 people travelling – but 200 of them were drivers," he said. "It was great fun in a way but it was a bit of strain waking up each day thinking, Oh god, even though we’re not playing today, we’re spending $300,000.”

The tour was the last to be supervised by McGuinness, who stepped down as U2 manager in 2013 after selling his Principle Management firm, established in 1982, to Live Nation. The band are now managed by Guy Oseary, who also represents Madonna.

“I think they will continue to do great things,” added McGuinness. “I stopped managing them a couple of years ago in a very amicable transaction when they bought my management company and took on some of my staff, and any rights or entitlements contained in that management company are now theirs.

McGuinness’ latest project is South of France-based crime drama Riviera, of which he is executive producer. The 10-part series debuts on Sky Atlantic on June 7.

Elsewhere, the 65-year-old gave his thoughts on a variety of music industry issues from Brexit to the value gap, and had some harsh words for YouTube and Google…

On the changing landscape of the music industry

It is now clear that the download is pretty much irrelevant, streaming is the future and Spotify is going to be the biggest distributor.  No one cares about ownership, it’s all about access. And access will be ubiquitous for film, TV and music. It must be confronted that the enormous volume of investment is coming from the record companies. And that business is now growing for the first time. After 20 years of decline it grew by 3% last year and more growth is expected in the next few years. The cycle we were used to, of album and tour, is no longer relevant.  Artists must engage on a much more continuous basis.  That’s why the live industry is thriving. If I were in the business now I would be very interested in what’s going on because you can release worldwide simultaneously in a much more meaningful way on Spotify and Apple now than was possible years ago. It’s all change.

About the value gap

YouTube is where most people get their music - and what surprises me to this day is how completely selfish, greedy, neglectful and oppressive the Google/YouTube/technology environment is. There are massive companies built on the back of free content which are still reluctant – indeed refusing – to take their proper responsibilities. I don’t know whether to hope that that’s changing. They’ve hired Lyor Cohen to kind of build bridges with the music industry. I’d really like to see some real change there.

The general paradigm is that YouTube are distributing music and paying labels and publishers, but they are paying such tiny amounts under deals that are outdated.  And YouTube are keeping the money and are able to invoke the safe harbour legislation that protects internet distributors from copyright. That is the case in America and in Europe. But in Europe there’s a change coming. The European Commission is starting to address copyright.

There were big wide discussions. It was difficult for me at times because what I was really saying was that the internet is not sharing its income with performers, artists, writers and labels.  But it was easy for some people to take a shot at me and say, He just wants more money from technology companies for U2. But it was in fact my argument a comprehensive argument that all artists were being mistreated. And the truth is that getting artists together to campaign for more money for artists is hard enough. It’s hard enough to get artists to go to a meeting.  It’s hard enough to a band to go a meeting with other members of the band.

It’s no longer about illegal downloads, it’s about transparency. Artists have record deals nowadays with their labels where, one way or another I hope, they are promised a share of the new kind of income from streaming services.  Most artists, I think it is fair to say,  do not believe that they are getting a fair share. You have to look at individual contracts to know what the requirements are.

On Brexit, copyright and what the UK government can do for music

Copyright doesn’t depend on the EU and copyright industries like television and film and music are a huge source of income in Britain. Britain is at the centre of European production and post-production. The French are best at copyright protection. They also have an elaborate system of subsidies for film, television and music industries. I don’t think Brexit is the end of the success of the British music industry, but it would be useful if Britain were to treat its music industry with a bit more respect and love. In film and television in post-production in Britain, there are extensive tax credits offered by the state. Why are those tax credits not offered to the music business? British music has dominated the world since the sixties. And it’s not just an industry, it’s the cultural impact throughout society. If kids learn instruments, form bands, start writing songs, it’s not just to get into the charts. They will have benefitted from that experience for the rest of their lives. It’s an enormously valuable educational thing to do. I get annoyed when people treat music like a lot of hustlers trying to make record deals and making a lot of money.

On performing rights societies in the past

I was appalled with what was going on. The performing rights society in those days were completely isolated. They were self-serving and used to make vast interest-free loans to each other. Accounting was very poor, especially overseas accounting. So I invited some managers to my house in Notting Hill, and I said to other managers, Let’s take a case. It will be quite expensive. I’ll run the case and I want £10,000 from each of you to fund it. And they all said, Absolutely great idea, we’re in. And not one of them paid up. So I ran the case and we had a great success and we changed the rules of the PRS. It was a great victory.

PRS is a massively reformed organisation now. And that wave of reform is spreading around the world because, in the digital age, it’s those mechanisms that will collect on behalf of writers. In the digital age there is no reason why each micro-transaction should not be captured. What you are going to see in the next few years is a strengthening of the performing rights around the world. And their international body CISAC, which is based in France, is taking a leading role in that process.