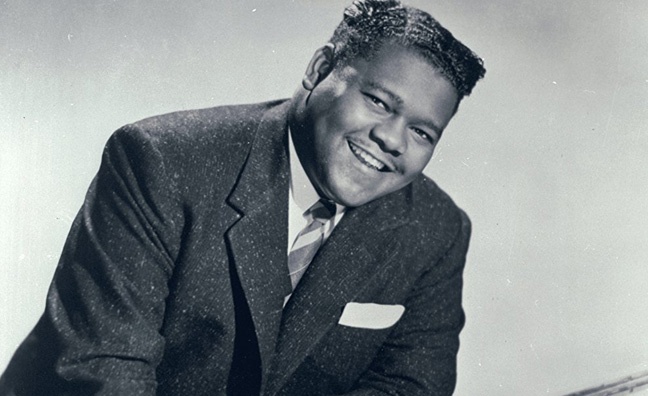 Legendary musician Fats Domino has died at the age of 89.

The pianist and singer-songwriter from New Orleans passed away in his hometown surrounded by his friends and family, his daughter Karen Domino-White told local station WWL-TV.

According to Mark Bone, chief investigator with the Jefferson Parish Medical Examiner's office in Louisiana, the star died of natural causes.

Fats, who is best known for his songs Blueberry Hill and Ain’t That A Shame, sold more than 65 million albums and five of his singles released before 1955 were certified gold.

He was inducted into the Rock And Roll Hall Of Fame in 1986 and the following year he received a Grammy Lifetime Achievement Award.

Of French Creole descent and a native of New Orleans, Fats, real name Antoine Domino Jr, he did a lot of public appearances for relief efforts after Hurricane Katrina.

Music industry tributes have come thick and fast, among them, James Donio, president of the Music Business Association (Music Biz), said: “Music Biz is saddened by the passing of Fats Domino, a true pioneer of Rock and Roll. Domino’s hits, including Blueberry Hill and Ain’t It A Shame, helped form the foundation of the modern music business, selling over 110 million records in the early days of rock'n'roll. In fact, his contributions to music were so valuable that the Library of Congress’ National Recording Registry has preserved Blueberry Hill as a historic recording, and Domino himself was one of the first 10 inductees to the Rock & Roll Hall Of Fame. The music business would not be the same without him, and we send our condolences to all his family and friends.”

Scroll down to read some of the tributes posted on social media.

Rest in paradise to Fats Domino. He paved the way for so many. I remember listening to his music as a little boy. #Fatsdomino ????????

"That innocence is there in his music ... people respond to that goodness." - Dr. John on Fats Domino.
RIP, Fats.https://t.co/99OCUgZNxt pic.twitter.com/FLSTMcJ7M0

.Rest In Peace, my friend. Fats Domino's rockin' records were just like he was, full of joy and happiness. #blueberryhill #rockandroll pic.twitter.com/46bEtDqneb

Fats Domino’s songs were all over the radio when I was growing up. He was a great singer and piano player and his music will last forever.

RIP Antoine #FatsDomino thank you for the powerful music, fitting you were inducted in first class of @rockhall https://t.co/GOTqnZUoa5

So long Fats. One of the greats. https://t.co/xvQyBDm59R

Was listening to Fats Domino recently, very sad to hear of his passing and so glad of the work he leaves behind.