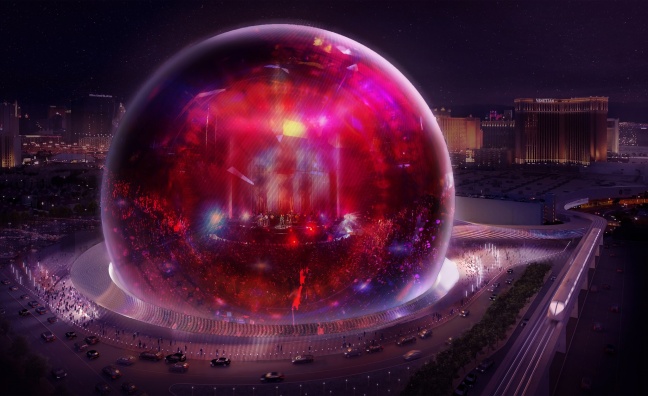 The Madison Square Garden Company has unveiled plans for a "game changing" next generation venue in London, which promises to challenge rival AEG's dominance of the London arena sector.

MSG’s executive chairman and CEO, Jim Dolan, has confirmed the company intends to make London the home of its first international venue after purchasing nearly five acres of land in Stratford - next to Westfield Stratford City shopping centre - for £60 million.

The London arena will be based on the same groundbreaking "MSG Spheres" concept as the first MSG Sphere planned for Las Vegas, Nevada. Spectaclar designs (pictured) were unveiled as part of a presentation at New York's Radio City Music Hall. The Vegas venue will have a capacity of more than 18,000 seats, all of which will be in front of the stage, and up to 5,000 standing.

“London is one of the world’s greatest cities, and we are delighted to be taking this first step towards making it the location for MSG’s first international venue," said Dolan. “We believe that a large-scale, next-generation venue will not only become a premier destination, but also drive growth in London’s overall music and entertainment market -- benefiting artists and fans, and serving as a long-term investment in the future of this incredible city.

"MSG Sphere will provide a home where like-minded communities can come together to not only interact with the performance, but also with each other.”

The development is a new twist to the ongoing dispute between rival live music companies AEG, Azoff MSG Entertainment and Live Nation, which began when Azoff MSG reportedly started refusing to book acts into its prestigious Madison Square Garden venue in New York unless they also played the company’s Los Angeles venue, The Forum, over AEG’s Staples Center. AEG  hit back, informing agents and promoters  that acts that choose The Forum over the SC will not be booked into its premier London venue, The O2.

MSG's London arena would see it go head-to-head for shows with The O2 and SSE Arena, Wembley, which is also operated by AEG. It is projected to support approximately 3,200 jobs annually, contribute £2.7 billion to the UK economy over the initial 20 years of operations, and generate additional revenues of over £50m every year for local businesses.

Culture secretary Matt Hancock said: "It's great news that the world-famous Madison Square Garden Company has chosen London to be home for its first international venue. This cements both the capital and UK's reputation for leading the world in music and the creative industries. This ground-breaking arena in East London will not only create jobs, but help us continue to develop incredible artists, music, and innovative technology that will give fans an amazing experience."

Designs for MSG Sphere London, including capacity, are still in their early stages and will be announced in the coming months.

MSG's other venues include New York's The Theatre at Madison Square Garden, Radio City Music Hall and Beacon Theatre; the Forum in Inglewood, California; The Chicago Theatre; and the Wang Theatre in Boston.