Gig-goers call for action on mobile phones at concerts 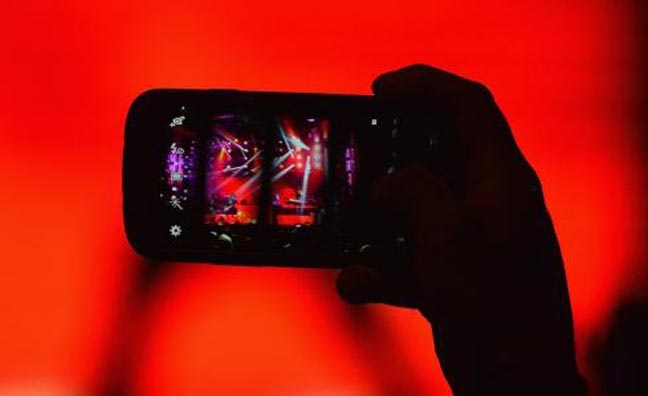 The majority of British gig-goers have called for greater measures to manage mobile phone use during concerts according to new research by ticketing platform Eventbrite.

Of the 1,031 people surveyed, 70% said they find it irritating when others turn to taking pictures and video  during the performance, 69% would support measures to reduce filming and photographing with phones and 65% said using their phone to capture images at a performance could make them feel as if they were missing out on the event itself.

However, more than one third of respondents agreed that taking pictures or videos was an important part of the live experience.

“You’ve got a paradox,” said Dr Lee Hadlington, associate professor in cyberpsychology at De Montfort University in Leicester. “People are saying, ‘It’s OK if I use my phone at an event - because I want to get this special photo - but when someone else does it, that’s really annoying.'”

The research, conducted by ComRes on behalf of Eventbrite, also found that, of British adults who have attended a live ticketed event in the last 12months, 49% said they took photos and videos at the events they attended – and this figure rises to 62% among those aged 18-24 and 35-44.

The majority of those who have attended a live event in the last year would support some action being taken to manage mobile phone use, such as creating ”no phone zones” (13%),  gentle nudges to make phones more discrete (41%), or audience spot-checks for over-filming (17%).

Eventbrite’s head of marketing Katie McPhee said: “Go to any stadium gig and you’ll be met with a forest of arms holding up mobiles and blocking lines of sight, so people behind feel irritated. Our report confirms that there is a general agreement between audiences, artists and promoters that using your phone during a live performance can be detrimental to the live experience – both for yourself and for those around you – and that it should be managed.

"We hope that our new report provides a starting point for a healthy discussion on how we can all ensure to make the most out of live experiences with or without our mobile phones.”

The Association For Electronic Music’s general manager Greg Marshall added: “Capturing a video or picture moment from a show is clearly important to a lot of event attendees, but it can also cause annoyance to others particularly if phones are held up excessively. We should look to strike a balance to ensure that both viewpoints are respected.”

Broadcaster and DJ Annie Mac told Music Week earlier this year that the modern obsession with mobile phones was damaging the clubbing scene.

Mac pointed to superclubs, like Output in New York and Berghein in Berlin, as coming up with potential solutions. "You're either not allowed to bring your phone in, which I think is a bit extreme, or they put a sticker over your screen so that you can't take photos," she said. "I think what will happen moving forwards is that it will become the thing to not have a phone in a club. I hope it will become the norm - I think that would be really good for clubbing in general.”