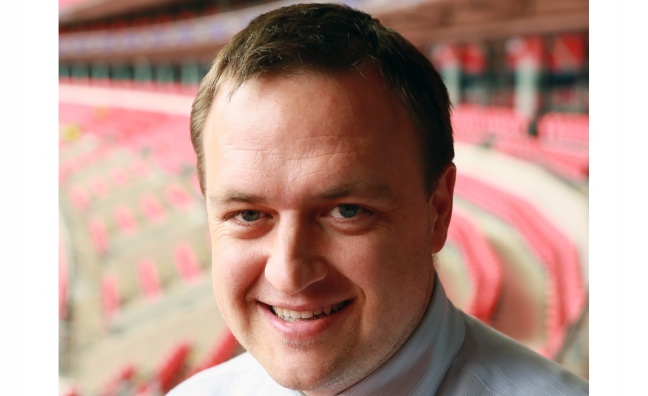 Wembley Stadium’s long-serving music boss Jim Frayling has reflected on a “brilliant” near 13-year stint at the venue as he leaves for pastures new.

“It’s all very amicable,” Frayling told Music Week. “I’ve done all the things that I set out to achieve at Wembley and it’s certainly the right time for me to move on.

"We are a world class stadium and, whilst there’s always room to improve, it’s genuinely a good offering that people get all-round. I can’t take sole credit for that - it is very much a team effort and I can move on knowing it’s in good hands.”

As the stadium’s head of business development, Frayling has been instrumental in bringing the likes of Adele, Eminem, Coldplay, U2, Muse, Beyoncé, Oasis, Foo Fighters and Take That to the venue since its 2007 reopening. Though there are fewer free dates available this year due to Tottenham Hotspur's arrangement to play their league and cup games at the stadium in 2017/18, it will still host gigs by ELO, The Stone Roses and four nights with Adele this summer.

"I am going out on high with Adele, which is epic, and ELO, which we did very quickly, which is brilliant because we got it fro m first enquiry to contracted and announced within a week. That’s the kind of thing we’ve been aiming for for years – to be that slick."

His only regrets concern the concerts scheduled for 2006 that had to be moved to other venues when it became apparent the new Wembley would not be ready in time.

“The Stones, who we booked in 2006, are very much one that got away,” he sighed. “We’d booked the Stones, Robbie Williams, Take That and Bon Jovi, and we never got Bon Jovi and The Rolling Stones back, so that’s a regret.”

Frayling, who has worked for London Wasps and QPR in the past, has handled a wide range of sporting events from football to NFL while at Wembley, and hopes to continue to combine his twin passions in his next role. “I am very open to offers,” he laughed. “I’d love to do both, but I may not get the option.”

It promises to be a busy summer for the capital's stadium sector, with Guns N' Roses, Robbie Williams and Depeche Mode to play the Olympic Stadium and U2 bringing The Joshua Tree tour to Twickenham. "We’ve got very good competition," added Frayling. "There are some very worthy competitors at stadium level and that’s good for everyone."