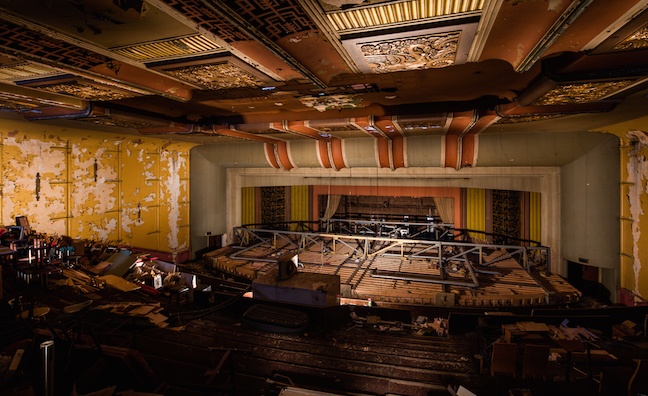 A brand new London venue – the Hackney Arts Centre – has been green lit by the local council.

The venue, formerly the art deco Savoy Cinema, will now be fully refurbished into a new music and arts venue for the local community. The main auditorium, which has been largely unused since the mid-‘90s, will be renovated, while two other areas, which have been used as a bar and cafe until recently, will also be given a major overhaul.

Speaking exclusively to Music Week's sister magazine, Pro Sound News Europe, Auro Foxcroft – founder of Village Underground, the team behind the renovation – hailed the decision by Hackney Council to give HAC the go ahead.

“Hackney Arts Centre will be a major new addition to London’s venue landscape,” he said. “The project has a 1,200-capacity standing venue and a second 1,000-capacity seated venue, spaces that are really lacking in the city. We’ve had a catastrophic loss of grass roots music venues over the last decade, with three lost on our same street last year alone – but we’re fighting back, 2016 was the first in seven years that London didn’t suffer a net loss of grass roots venues and with HAC in the making things are looking up. We’re working hard to make the project a treasured cultural space for everyone.”

Foxcroft told Music Week earlier this year: “You’ve got Hammersmith and Shepherd’s Bush out west, you’ve got Brixton Electric and Academy down south, you’ve got Kentish Town Forum and Roundhouse in the north and nothing in East London. We’re going to plug that gap. It’s also got a really powerful education and training programme for young people, particularly focusing on young people from challenging backgrounds. We will continue Village Underground’s job of breaking new acts and getting behind emerging talent. We want to reflect the amazing mixed communities of Hackney and London in the programme.”

The Hackney Arts Centre is tentatively scheduled to open in March 2018.